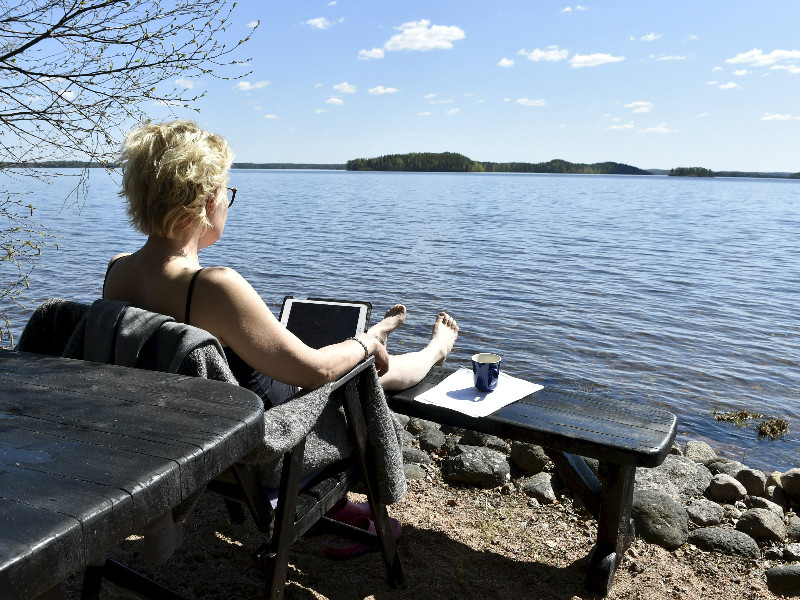 A woman worked remotely on the shore of Lake Vuohijärvi in Kouvola, Southern Finland, on 25 May 2020. (Jussi Nukari – Lehtikuva)

JYRI HÄKÄMIES, the director general at the Confederation of Finnish Industries (EK), estimates that the decision to quash the recommendation on remote work is an important step forward toward opening the national economy.

The Finnish government announced yesterday that the recommendation will be lifted on 1 August.

Häkämies on Tuesday stated to Helsingin Sanomat that the decision could have been made earlier, as companies have already formulated protocols to ensure employees can return to the workplace as safely as possible.

Aino-Kaisa Pekonen (Left Alliance), the Minister of Social Affairs and Health, reminded yesterday in a press conference that the shift to remote work has supported the effort to control the coronavirus epidemic in Finland. Workplaces where remote work is not an option, meanwhile, have introduced other safety instructions similarly to good effect.

Pekonen revealed that remote work has been comparatively widespread in the country, with an estimated 60 per cent of employees working from home since mid-March.

“This is an indication of changes in working life, among others. There’s a lot of potential to increase remote working,” she was quoted as saying by Helsingin Sanomat.

Also Häkämies gauged that the last three months have been educational.

“I’m sure we won’t see a [complete] return to the old, but the future will show which of the learnings will stick,” he said, adding that face-to-face encounters and meetings remain more effective for activities such as brainstorming and negotiations.

Niilo Hakonen, an expert in working-life development at Local Government Employers (KT), viewed that the transition to remote work went smoother than expected also in the municipal sector, despite its relative lack of experience from remote work compared to the central administration or private sector.

“This has been a shake-up first and foremost for superiors, who’ve had to mull over how to manage work remotely,” he said to Helsingin Sanomat. “Mostly the experiences from remote work are positive.”

The daily newspaper also reminded that many employees have said they would jump at the opportunity to return to the workplace and interact with their co-workers.