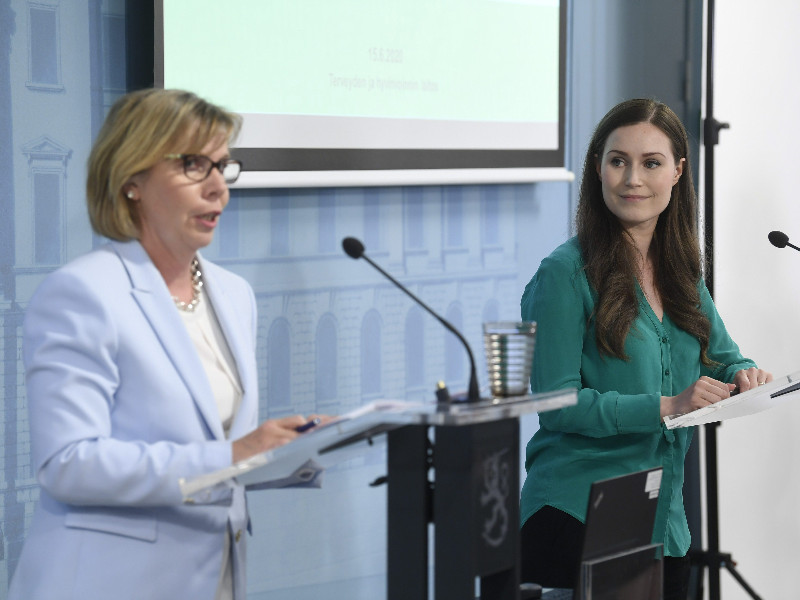 Minister of Justice Anna-Maja Henriksson (left) and Prime Minister Sanna Marin (right) announced the lifting of the state of emergency in a press conference in Helsinki on Monday, 15 June 2020. (Vesa Moilanen – Lehtikuva)

THE STATE OF EMERGENCY declared over the coronavirus pandemic was lifted in Finland at 12.00am on Tuesday, 16 June.

Prime Minister Sanna Marin (SDP) on Monday announced the government concluded in its meeting that the grounds for wielding powers afforded under the emergency powers act are no longer in place.

The government consequently issued decrees for repealing the decree to commission the emergency powers act adopted in mid-March.

Many of the restrictions adopted to control the epidemic will remain in effect in spite of the determination, as the emergency powers act was used mostly to organise the work of social and health care professionals, allow municipalities to postpone non-urgent care, and enable employers in critical sectors to deviate from regulations governing working time and holidays.

The restrictions on public gatherings and restaurant operations were introduced under the act on communicable diseases and will consequently remain in effect until further notice.

Marin revealed that the government will review all the recommendations and measures in place today to determine the extent to which they must be clarified in ordinary circumstances.

Anna-Maja Henriksson (SFP), the Minister of Justice, on Monday said she hopes the emergency powers act need not be invoked going further but reminded that it will depend largely on how well the public continues to adhere to the recommendations of officials.

Marin underscored that lifting the state of emergency should not be misinterpreted as a sign that the coronavirus epidemic is no longer a threat in Finland. If the virus began to spread rapidly again, she said, the government would seek to bring it under control it with tools afforded under the normal legislation.

“We’ll try to consolidate the normal legislation so that we can manage and cope with the tools [it provides] in the event of a possible second wave,” she said.

Henriksson echoed her assessment, saying the threshold for invoking the emergency powers act is higher than earlier.

The Finnish Institute for Health and Welfare (THL) on Monday revealed the number of coronavirus-related deaths has stayed unchanged, at 326, since Sunday. The number of laboratory-confirmed infections crept up by four to 7,108, whereas that of patients in hospital care continued to decline by four to 22 between Sunday and Monday.

Three of the patients in hospital care were in critical care, signalling a rise of two from the previous day.