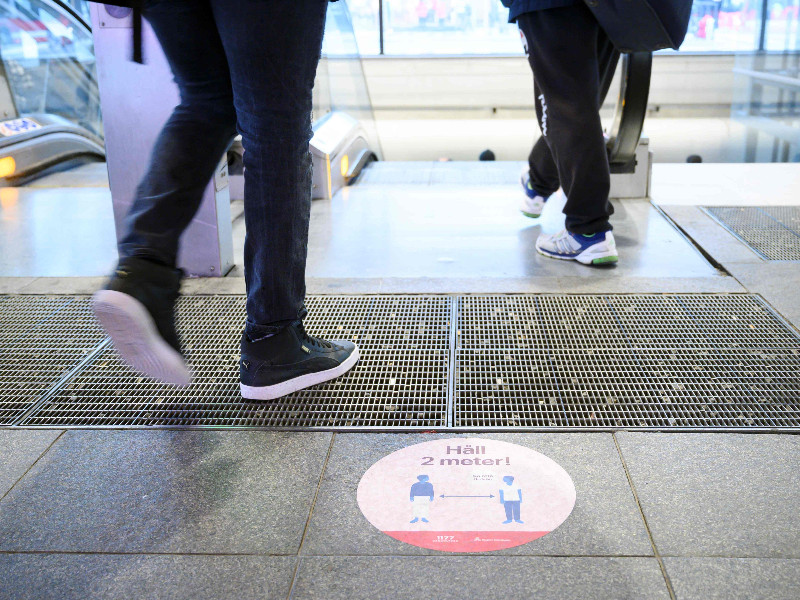 A sticker reminding people to practise social distancing in downtown Stockholm on 12 May 2020. (Henrik Montgomery – AFP/Lehtikuva)

HAD FINLAND followed Sweden’s example in the battle against the new coronavirus, its death toll from the virus would already stand at 2,524, according to the Finnish Institute for Health and Welfare (THL).

Finland and Sweden have taken vastly different approaches to the pandemic, the former resorting to closures, prohibitions and restrictions and the latter primarily to instructions and recommendations.

Suvi Mäklin, a senior researcher at THL, told Helsingin Sanomat that the numbers reveal how many people would have died by now had Finland adopted the same strategy as Sweden. “We have refrained from making predictions about the future,” she said.

The estimate of saved life-years, she stressed, is a preliminary one.

“As we know that nursing homes have had plenty of deaths related to the coronavirus and that people living there have a life expectancy that's shorter than the average among their peers, our estimate is still preliminary,” she elaborated.

The actual death toll from the new coronavirus stood at 324 in Finland at 1.40pm on Wednesday, 10 June. Sweden, by contrast, has reported over 4,700 deaths related to the epidemic.

Mäklin argued to the newspaper that comparing the number of deaths in the two countries is relevant because their societies and age structures are relatively similar. The comparison, therefore, can be used to draw conclusions about the impact of different strategies against the virus.

It would similarly be warranted to compare the numbers to costs to determine the price of each life-year saved in Finland. “I believe it’d be good to compare the price paid for the coronavirus to the cost of other diseases,” said Mäklin.

Finland could have, however, softened the blow to its economy by over five percentage points in April by adopting the same strategy as Sweden, according to THL.