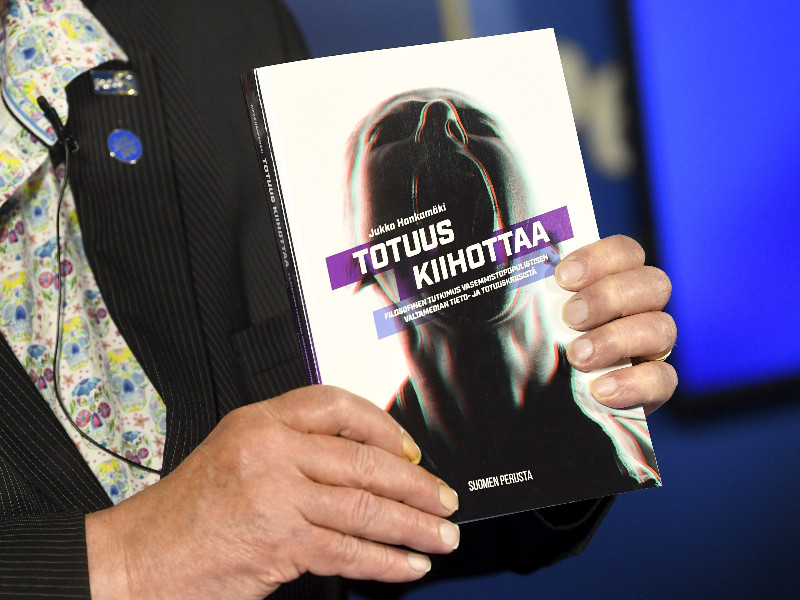 SUOMEN PERUSTA, a think tank founded by the Finns Party, has pulled a newly released publication from shelves after it caused an outrage with its attitudes toward women.

Authored by Jukka Hankamäki, the publication presents itself as “a philosophical study of the truth and information crisis of the left-wing populist mainstream media”, representing a continuation of the media criticism trumpeted by various populist right-wing parties.

What is shocking about the publication, however, is its depiction of women. One of its chapters focuses on the “tyranny of women” and “socialisation of sexuality”, arguing for example that the criminalisation of marital rape is an exhibit of “squaring the circle” and “goes against” the idea of marriage.

“The spread of the sugar dating and grooming phenomena is largely a consequence of women’s own policy of skimping on sex,” it read.

Some Finnish women, another section alleged, have wanted to “exact revenge on the Finnish society by mating with a foreigner”.

Helsingin Sanomat’s Aku Isotalo on Wednesday wrote that perhaps the most shocking part deals with a large sexual harassment case linked to a teacher at Kallio Upper Secondary School of Performing Arts in Helsinki. A total of 61 current and former students accused the teacher of making sexual advances and improper conduct.

Although six of them also filed a report with the police, no pre-trial investigation was opened because the alleged incidents had occurred in 1997–2014 – prior to the criminalisation of sexual harassment.

Hankamäki described the teacher as a victim and media coverage of the case as a “rotten apple” of the Me Too movement.

“In reality,” he wrote, “high-school women who have or are about to come of age resemble drama queens whose viciousness and self-righteousness is something adults should be protected from. The difference between the despotic nature of young women and dictators is mainly that the ugliness and pockmarks of tyrants have taught them a sense of proportion that is lacking in girls suffering from narcissism.”

The Ministry of Education and Culture is currently reviewing the controversial publication to determine if it constitutes a violation of the conditions of the aid granted to Suomen Perusta, revealed Hanna Kosonen (Centre), the Minister of Culture and Science.

“One of the obligations of recipients of the aid for general activities is to promote equality and non-discrimination. It already seems clear that the aforementioned publication does not meet the obligation,” she tweeted on Wednesday.

Kosonen said the Ministry of Education and Culture can request a report about the use of the aid and, based on it, make a decision on whether or not to claw back the aid.

“The minister doesn’t take part in these decisions,” she said. “I nonetheless want to make this clear on my behalf: the excerpts of the publication I’ve seen are cruel and alarming and far from my views of humanity.”

The Finns Party Youth, the official youth wing of the Finns Party, was recently declared bankrupt partly because it was ordered to pay back state aid after a series of dubious public statements.

The publication has also been criticised by several Members of the Finnish Parliament.

Jussi Halla-aho and Riikka Purra of the Finns Party responded to the criticism in a joint press release, stressing that they have yet to read the publication and reminding that the views expressed in it should not be interpreted as statements of the party or reflections of the party platform.

“We currently do not know the context of the parts cited from the book, but at first sight it appears that discretion and quality control was lacking from the publication process,” they said.