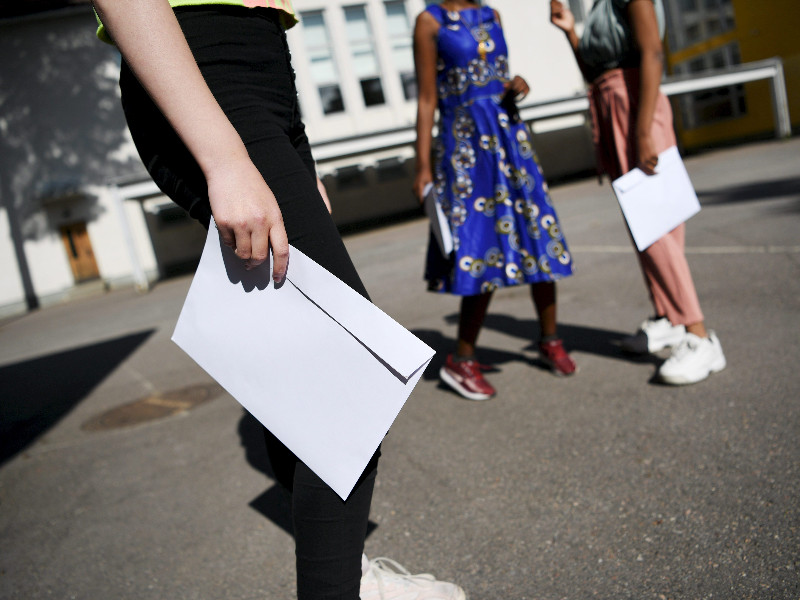 Pupils holding their school-year reports in Helsinki on Saturday, 30 May 2020. The Finnish capital has reported that the resumption of in-person teaching for the last two-and-a-half weeks of the school year has led to no up-tick in the number of coronavirus infections. (Antti Aimo-Koivisto – Lehtikuva)

THE RE-OPENING of schools appears not to have resulted in an up-tick in coronavirus infections in Helsinki.

The City of Helsinki on Thursday reported that nine pupils and two staff members from eight schools across the city tested positive for the new coronavirus during the roughly two-and-a-half-week period between 14 and 30 May.

All but one of the infections, however, have been traced to a source outside the school – namely to a family member. Even the only exception has been traced to small-group teaching organised prior to the re-opening of schools on 14 May.

A total of 144 pupils and 23 staff members were ordered into quarantine for coming into close contact with the infected, but the majority of them have already been released from quarantine.

It is possible that some school-related cases are still reported given the up to 14-day incubation period of Covid-19.

No new infections reported in Finland on Thursday

The Finnish Institute for Health and Welfare (THL) on Thursday reported that the total number of coronavirus infections in the country stands at 6,911 after no new infections were reported between Wednesday and Thursday.

The death toll from the virus rose by one to 322. The number of people in hospital care decreased by one to 50, while that of people in critical care stayed unchanged at seven.

THL on Thursday also published its weekly report on the epidemic situation, viewing that the epidemic has slowed down to some extent over the past two weeks. The average number of cases reported weekly to the infectious diseases register, it highlighted, has declined substantially from two weeks ago but remained largely unchanged from last week.

“Based on the number of detected infections, the epidemic situation is alleviating and wastewater studies have corroborated the conclusions drawn from individual testing,” it said.

The Ministry of Social Affairs and Health reported yesterday that the new coronavirus is presently estimated to have a reproduction number of 0.75–0.80 in Finland.

“This means the coronavirus epidemic has been on the wane for some time now in Finland. No new cases were detected in eight health care districts over the most recent monitoring period between 25 and 31 May,” it stated.

“The number of patients in hospital care has decreased substantially from the situation two weeks ago. The health care situation in the special responsibility areas of university hospitals is calm. The critical care capacity has not been exceeded once. Nearly 80 per cent of all patients admitted to hospital have been treated in hospitals in the special responsibility area of Helsinki University Hospital (HYKS).”

THL also reported that the number of samples tested for the new coronavirus rose by about 2,600 to 195,400 between Wednesday and Thursday.

Laboratories in Finland are currently capable of testing more than 13,000 samples a day. The number of tests conducted, however, declined from the previous seven-day monitoring period between 25 and 31 May.

The number of people who are believed to have recovered from the disease stands at 5,800, equalling 85 per cent of detected cases. The estimate is based on the number of cases reported at least three weeks ago that have not been supplemented with any updates about the course of the disease.