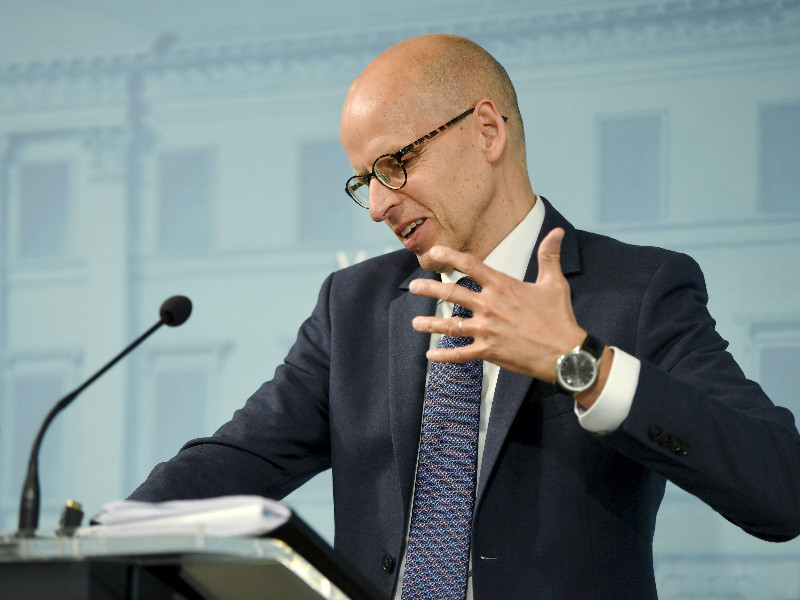 Martti Hetemäki, the permanent secretary at the Ministry of Finance, gestured at the release event of the second report of his so-called exit task force in Helsinki on Monday, 1 June 2020. (Antti Aimo-Koivisto – Lehtikuva)

A TASK FORCE led by Martti Hetemäki, the permanent secretary at the Ministry of Finance, has presented its second report outlining a way out of the social and economic crisis kindled by the coronavirus pandemic.

Hetemäki on Monday stated that, despite the risk of a second wave of infections, the government should begin preparing for aftercare and re-building without delay.

Finland, the report suggests, should increase borrowing temporarily to make investments and introduce stimulus measures in the aftercare stage but simultaneously begin re-building by, for example, implementing labour market reforms in order to ensure the long-term sustainability of the national economy.

“Structural reforms should not slow down because of the crisis,” the report reads.

Reforms alone, however, will not suffice to reinvigorate the economy, but they must be supplemented with spending cuts and tax increases. Hetemäki highlighted that the government is presently running up debt at such a rate that adjustments worth about seven billion euros will be required to balance the debt ratio in the 2020s.

“If this was to be done only by increasing employment, it means the number of the employed would have to be as much as 240,000 higher than before the crisis,” he was quoted as saying in a press conference on Monday by Helsingin Sanomat.

The task is challenging. The Finnish government states in its government programme that it is committed to growing the ranks of the employed by 30,000 this autumn – a tough ask even before the current crisis.

The Ministry of Employment and the Economy has estimated that the number of unemployed job seekers has increased, mostly due to temporary lay-offs, by over 180,000 since February.

“It’d be smart to use our time now on preparing structural measures so that they’re at our disposal once the economic situation is better and labour demand is strong,” said Hetemäki. “Employment has such a massive impact on many things, including the public economy, that now is a good time to improve expertise and do anything that improves job opportunities and productivity.”

The stimulus effort should place an emphasis on green initiatives that support the transition to a carbon-neutral society, according to the task force. The emphasis, it added, should shift gradually from measures that encourage economic activity to investments in research, development and innovation that support the green transition.

The task force pointed out that as the aftercare and stimulus increase public sector indebtedness, the aftercare and re-building strategies should be seen as a whole where short-term measures are backed by a roadmap for restoring the sustainability of the public economy after the crisis.

The Finnish government, after discussing the report yesterday afternoon, has asked ministries to draft an action plan by 21 June.