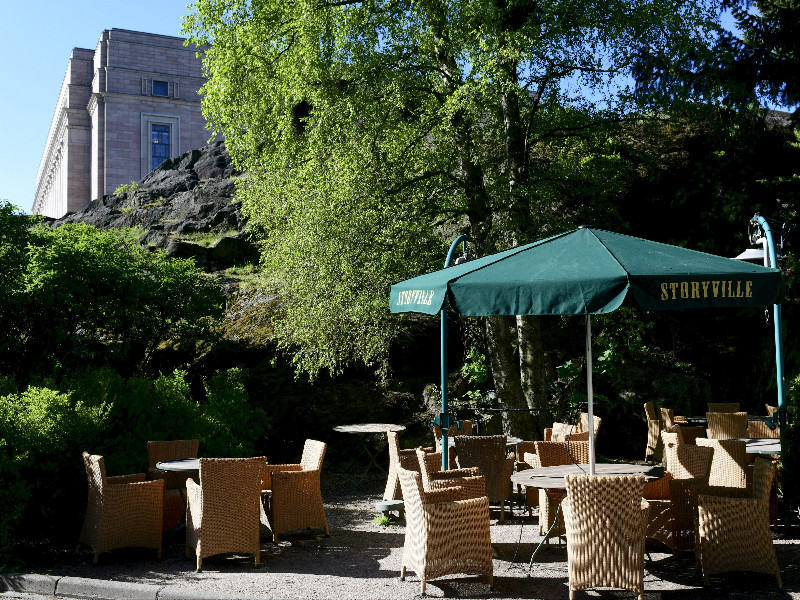 Chairs and parasol-covered tables waited for customers outside Storyville in sunny downtown Helsinki on Friday, 29 May 2020. (Heikki Saukkomaa – Lehtikuva)

THE EASING of the restrictions adopted to slow down the spread of the new coronavirus will offer a number of pastime options to residents of Finland as of Monday, 1 June.

Bars, cafés and restaurants will be able to welcome eat-in customers for the first time in over two months as of today, as the country enters the second stage of restrictions under a bill approved by President Sauli Niinistö on Friday.

Such establishments can be open between 6am and 11pm and serve alcohol between 9am and 10pm, but can only take in a half of their usual maximum indoor capacity and must provide a seat to all customers. They are also required to adhere to a series of hygiene-related obligations and make sure customers are not seated too close to one another.

Customers, meanwhile, can pick up their orders from the counter but cannot serve their own food or drinks in buffet style.

The law enabling the government to allow bars, cafés and restaurants to re-open their door while imposing restrictions on their operations is set to remain in effect until the end of October.

The Finnish government outlined last week – after apparently wrangling over the issue for a couple of days – that travel inside the country is allowed as long as travellers follow the safety instructions issued due to the coronavirus epidemic.

Travelling abroad, on the other hand, is still not recommended for other than absolutely necessary reasons.

VR, the Finnish state-owned railway operator, said it expects passenger volumes to creep up gradually during the course of the summer and its operations to return to “close to normal” on 15 June. While the company will re-open the waiting facilities of several stations today, the only immediate change to its rail services is that some trains will stop at Turku Harbour.

VR told that its long-distance trains had 80 per cent and local trains 70 per cent fewer passengers than usual on Friday.

“We’ve prepared for the busier period by communicating with our customers actively actively about what we’re doing to make rail travel as safe as possible and how customers can travel by train as responsibly as possible,” its spokesperson said. “For example, we’ve switched to disinfecting detergents in train cleaning, stepped up the cleaning of contact surfaces and acquired an efficient disinfection machine.”

Helsinki Region Transport (HSL) stated on its website that its bus services have switched to summer timetables but will include no weekend night services until further notice. The drivers drivers will continue to not sell tickets to avoid contact with passengers, although passengers remain obliged to present a valid ticket upon boarding the bus.

Its metros and trams, meanwhile, are operating on a reduced service frequency.

Libraries to re-open, hobby and sports events to go on

The government has also decided to ease the ban on public gatherings from more than 10 to more than 50 people as of 1 June. Public events with more than 500 attendees will not be allowed to take place until the end of July.

The ban on public gatherings will also apply to culture, hobby, exercise and sports events organised by private and third-sector organisations, as well as to religious events.

Today will also mark the start of the gradual re-opening of various public facilities ranging from state and municipal museums and theatres to cultural centres, hobby facilities and swimming pools and other sports venues. The safety of indoor and delineated outdoor facilities such as zoos, libraries and amusement parks will be guaranteed by restricting customer volumes and issuing hygiene and distance instructions.

The Finnish government continues to recommend that people work remotely for the time being.