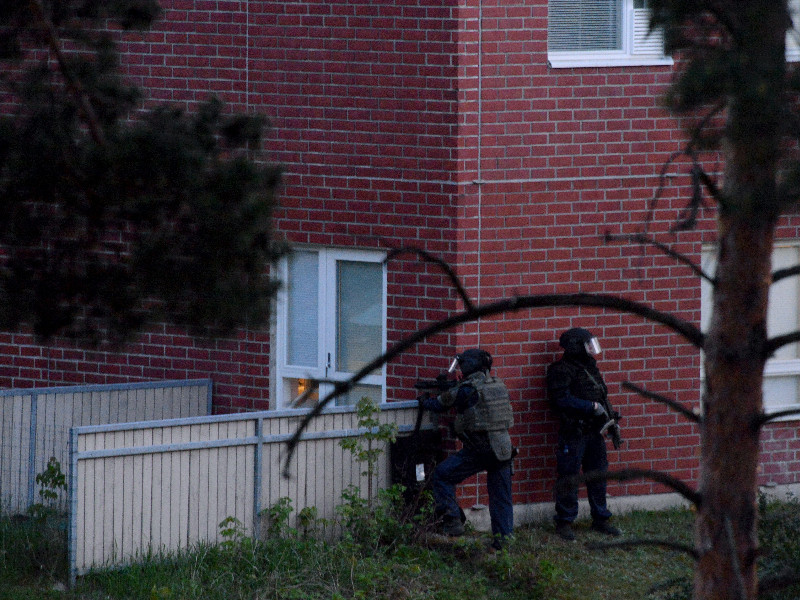 Heavily armed police officers at the site of an explosion that took place at around 8.30pm in Mäkkylä, Espoo, on Monday, 25 May 2020. (Mikko Stig – Lehtikuva)

TWO POLICE OFFICERS were injured in an explosion in a flat in Espoo, Finland, on Monday, reports Helsingin Sanomat.

Western Uusimaa Police Department revealed before 11pm yesterday that the explosion took place at around 8.30pm in a flat that was the target of a routine operation involving several police officers in Mäkkylä, Espoo. It added in the wee hours of today that one person was found dead in the flat.

Two officers were taken to hospital with minor injuries sustained in the blast, but they did not require long-term hospital care, according to the press release.

The newspaper wrote that police officers continued to investigate the site of the explosion and the surroundings of the building at around midnight. Petri Launiainen, the chief of communications at Western Uusimaa Police Department, revealed that police are operating under the assumption that there may be more explosives in the flat, adding that the operation may still take several hours.

There are presently no indications that the incident is linked to either organised crime or terrorism, wrote Helsingin Sanomat. Police have yet to comment on the nature of the offence or offences under investigation.