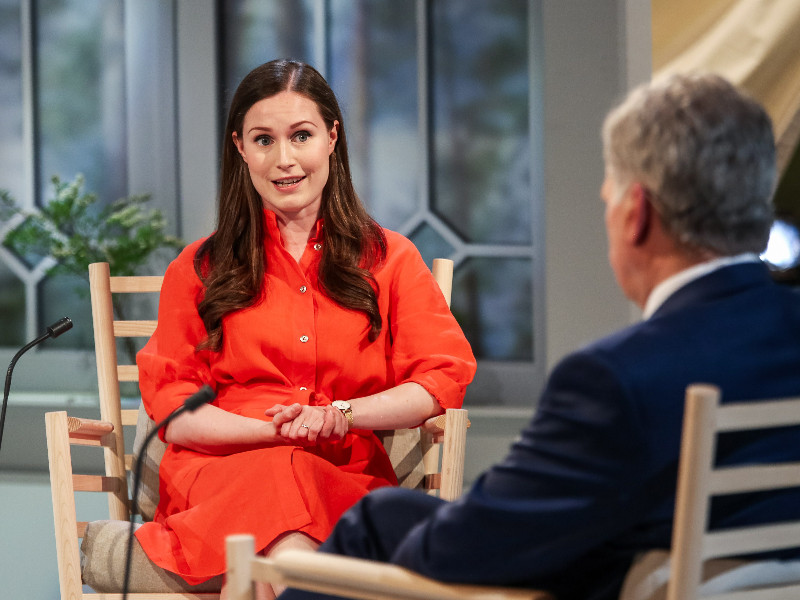 Prime Minister Sanna Marin and President Sauli Niinistö talked in a YLE studio during the Kultaranta Talks in Helsinki on Sunday, 24 May 2020. (Handout / Matti Porre – Office of the President)

THE NEW POSITION of Germany on the fiscal stimulus required by the economic crisis triggered by the coronavirus pandemic is an indication of its readiness to examine the situation from a broader, Europe-wide viewpoint, views Prime Minister Sanna Marin (SDP).

Germany and France will today table their proposal for a stimulus package of 500 billion euros in a move reflecting a major shift in the position of the largest eurozone economy.

Austria, Denmark, Sweden and the Netherlands unveiled their proposal on the package on Saturday, insisting on strict conditions on loans granted to pandemic-hit member states. The European Commission, in turn, is expected to present its views on the issue by the end of this week.

“This is a massive question for the coming week,” Marin commented on Sunday at Kultaranta Talks, an annual foreign and security policy debate forum hosted by President Sauli Niinistö. “We’re waiting for the commission’s proposal, and the government will weigh up the situation then. The Parliament wields the final budgetary powers, and we have to hold fast to that.”

Germany’s shift in regards to the issue, she added, may be an indication that it is evaluating the need for fiscal stimulus not only from its own but also from a broader perspective.

“The crisis has been very unusual in that it has touched every person and every country so strongly. We all have to be ready to look at the issue from a new perspective. Every European country come out of its foxhole a bit, but do so while holding on to its own principles,” outlined Marin.

She declined on the preference of Finland, stressing that the government must focus not on how its views align with other member states but rather on the issue at hand.

“Finland will try to be a constructive and collaborative contributor. In order for us to find common solutions, everyone has to make compromises. I don’t see this as countries belonging to certain camps, but as us seeking common solutions.”

Niinistö, however, viewed that the EU may be faced with a tough challenge in the near future due to the gap between the views of Germany and those of Austria and the Netherlands.

“Our EU friends are a bit divided right now: Germany is leaning that way a bit, while Austria and the Netherlands are leaning the other way a bit. Europe will face a tough challenge in a year or two, when I believe it’ll be necessary to return to the road to order, wipe the table and keep it clean. The more united the EU, the stronger it will be,” he said.

The Kultaranta Talks was held virtually in participation with YLE.

Minister of Finance Katri Kulmuni (Centre) on Friday estimated that the bloc will insist on at least a few amendments to the proposal of Germany and France. Tytti Tuppurainen (SDP), the Minister of European Affairs and Ownership Steering, said Finland’s position on stimulus is “constructive and open”.