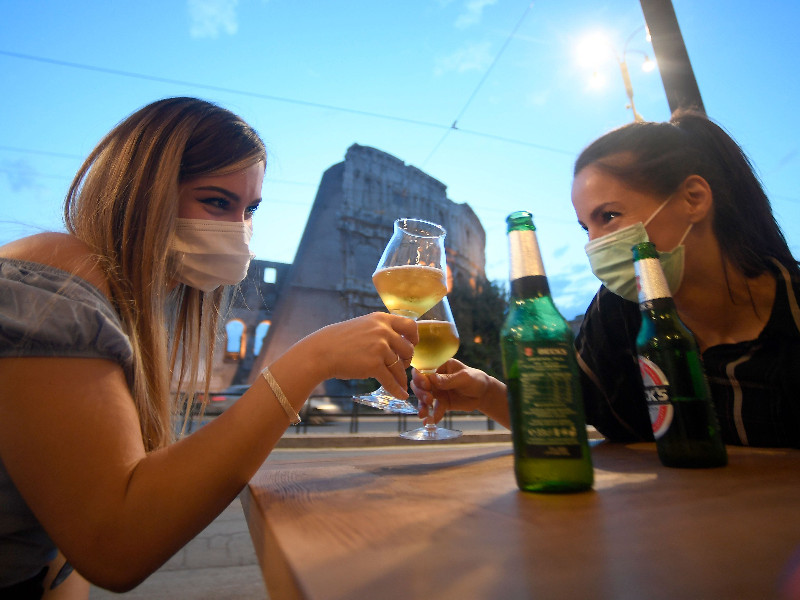 Young people enjoyed aperitifs outside a bar in Rome, Italy, on 18 May 2020, as restaurants in the country welcomed back customers after a two-month lock-down. Restaurants in Finland are set to do the same under certain conditions on 1 June 2020. (Filippo Monteforte – AFP/Lehtikuva)

THE FINNISH GOVERNMENT has reached an agreement on the conditions under which bars, cafés and restaurants are allowed to open their doors to eat-in customers as of 1 June.

Minister of Finance Katri Kulmuni (Centre) on Tuesday revealed that such establishments will be allowed to stay open until 11pm but must stop serving alcoholic beverages one hour earlier and take in no more than a half of their usual number of customers.

Beverages ordered before 10pm, however, can be consumed until the closing time.

“Restaurants must take care of safety also outside, even if the capacity restriction does not apply to outdoor terraces. I’m confident that business owners in the restaurant sector are responsible. The better the safety of customers is taken care of, the smoother the return to normal will be,” commented Kulmuni.

The Finnish government ordered bars, cafés and restaurants to close their doors to non-takeaway customers on 4 April 2020.

Krista Kiuru (SDP), the Minister of Family Affairs and Social Services, added in a press conference that bars, cafés and restaurants will also be required to maintain a high level of hygiene, make sure their customers are seated at a sufficient – but unspecified – distance from one another, and instruct customers not to enter the establishment with any symptoms.

Such establishments have a “principal obligation to re-organise the facilities in such a way that customers are not exposed to the spread of the disease and feel safe”, according to Kiuru.

The rule of thumb, she added, is that customers should sit in their own tables and should not serve themselves in buffet style, but they are allowed to pick up their orders from the counter.

The Regional State Administrative Agency (AVI) will be tasked with monitoring the compliance of restaurants with the obligations and restrictions together with the police and will be authorised to order restaurants to both rectify any shortcomings and, in the case of more serious violations, shut down for up to one month.

A bill to amend the act on communicable diseases that allows the government to impose restrictions on the operations of restaurants has already been presented to the Finnish Parliament. The amendments are to remain in effect until the end of October, but the government remains ready to relax the restrictions further or introduce stricter restrictions depending on the spread of the virus.

“The law would, for as long as the state of emergency remains in effect, lay down restrictions on restaurant operations that are necessary for opening the commercial activity to customers while preventing the coronavirus from spreading,” the government outlined.