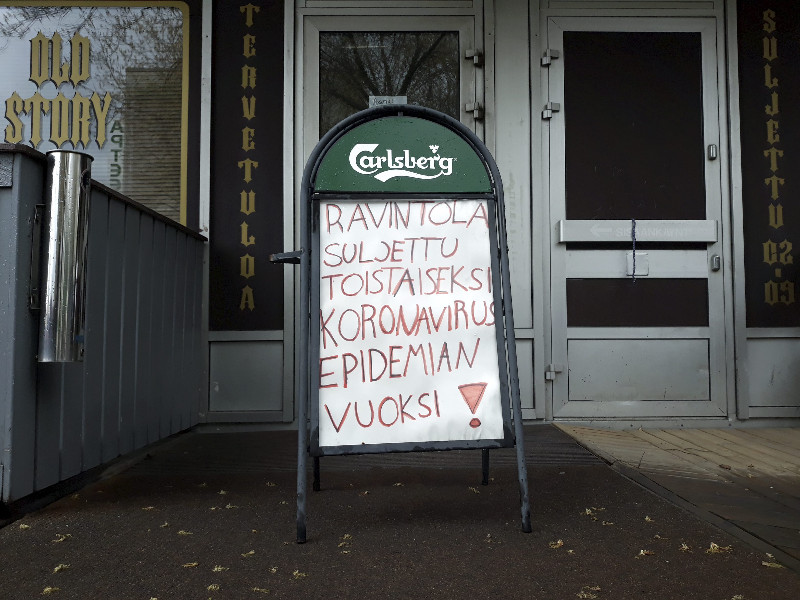 Sports pub Old Story in Vantaa has closed its doors temporarily due to the coronavirus pandemic. (Timo Jaakonaho – Lehtikuva)

THE FINNISH Hospitality Association (Mara) has reiterated its concern about businesses in the restaurant and accommodation sector amid the coronavirus pandemic.

Mara on Monday reported that the pandemic has had a devastating impact on the profitability of businesses in the sector, with the majority of them revealing that their operating margins have eroded by 80–100 per cent.

The businesses are not expecting their fortunes to change in the near future, indicates a survey conducted by Mara. Only nine per cent of the almost 700 respondents voiced their confidence in their ability to restore their profitability in the next six months, while 15 per cent estimated that they are presently at risk of bankruptcy.

The survey was conducted between 11 and 13 May.

Almost three-quarters (74%) of the respondents said they intend to adjust their operations in pursuit of profitability, while 90 per cent revealed that they have already resorted to – often widespread – temporary lay-offs to stay afloat.

There is a risk that the temporary lay-offs become permanent as the crisis drags on, warned Mara.

Mara on Monday reminded that while the struggles of hotels, restaurants and spas have been well documented, the coronavirus pandemic has also hit other tourism and leisure service providers, such as ski resorts, adventure services, amusement parks, conference centres, and fair and festival organisers.

The pandemic has also delivered a blow to festival organisers, cancelling all large festivals scheduled for June and July and many scheduled for August. The cancelled festivals include Flow Festival in Helsinki, Ilosaarirock in Joensuu, Pori Jazz in Pori, Provinssirock in Seinäjoki and Ruisrock in Turku.

Mara reported that festival organisers saw their revenues plummet by almost 90 per cent year-on-year in April.

The restaurant and accommodation sector is thereby preparing for the ever-important summer season from a weak economic position and can expect little if any assistance from visitors from overseas.

“This is why domestic travel will be critical at least until the end of this year for determining how businesses in the sector can survive and whether bankruptcies and mass unemployment can be avoided,” said Timo Lappi, the managing director of Mara.

Lappi underlined that support from the central administration is necessary to safeguard future operations and employment in the sector. The value-added tax on restaurant food, he proposed, could be lowered temporarily to 10 per cent and that on travel services to five per cent.

“It is crucial that consumers move, travel domestically and use services. It is the best remedy also for the Finnish economy and employment situation,” he viewed.