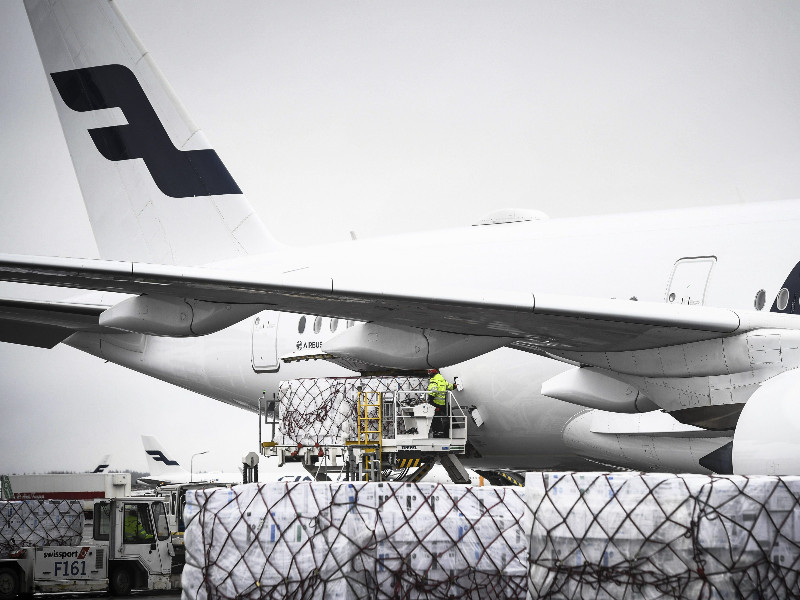 A Finnair aircraft carrying personal protective equipment needed in the fight against the new coronavirus was being unloaded at Helsinki Airport on 15 April 2020. (Emmi Korhonen – Lehtikuva)

AN EMPLOYEE of the National Emergency Supply Agency (HVK) is suspected of misuse of a position of trust in connection with the infamous personal protective equipment order placed by HVK in March.

The National Bureau of Investigation (KRP) on Tuesday announced it is looking into the role of “individual employees” of the agency in the much-discussed debacle.

“We are looking into whether the procurement process violated laws or the rules of the National Emergency Supply Agency. One person is presently suspected [of an offence],” said Mikko Laaksonen, the detective chief inspector in charge of the pre-trial investigation at KRP.

He did not specify the role of the suspect in the agency.

Helsingin Sanomat wrote on Friday that HVK has terminated the contracts of two members of its board of directors, Jyrki Hakola and Asko Harjula. Both Hakola and Harjula had been relieved temporarily of their official duties in April.

The pre-trial investigation revolves around two multimillion-euro orders placed by the agency for face and respirator masks required in the effort to combat the coronavirus pandemic and – more specifically – the contents of the contract signed with the suppliers. One representative of the suppliers is presently suspected of aggravated fraud, while another person is suspected of aggravated money laundering.

Nearly three million euros in funds and two luxury cars have also been seized during the course of the inquiry.

HVK in March ordered almost 10 million euros’ worth of face and respirator masks from companies headed by Onni Sarmaste and Tiina Jylhä, Finnish entrepreneurs with histories of debt enforcement and financial discrepancies. Sarmaste began the deliveries early last month, but it was soon determined that, contrary to expectations, the masks were not fit for hospital use.

The masks have also caused allergic reactions in the users.

Jylhä on Friday notified HVK of her intention to terminate the supply contract, announcing she is seeking almost three million euros in compensation for margin erosion.