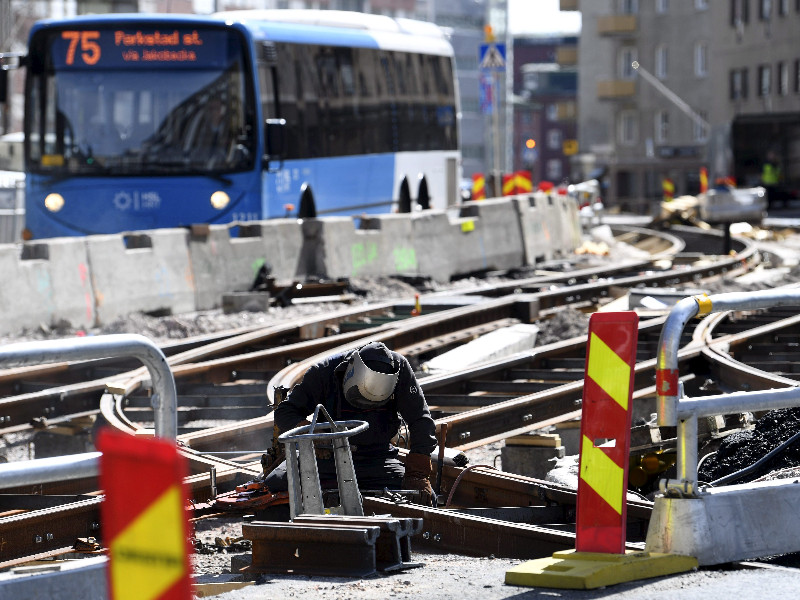 Tram tracks under construction on Hämeentie in Helsinki on 8 May 2020. (Vesa Moilanen – Lehtikuva)

ECONOMISTS Matti Virén and Björn Wahlroos believe Finland cannot make its way out of the impending recession with subsidies and fiscal stimulus.

Wahroos reminded Helsingin Sanomat on Sunday that the Finnish economy was not exactly firing on all cylinders prior to the economic crisis triggered by the coronavirus outbreak: its output had failed to grow over the past little over ten years.

“In Sweden, for example, [the output] has grown by around 20 per cent,” he highlighted to the newspaper.

The Finnish economy, he added, is inevitably heavily depend on export industries due to the small domestic market. “It means that an already a bleak outlook becomes even crueller for the Finnish economy.”

Currently the board chairperson at Sampo, Wahlroos dashed cold water on hopes that the economy can be dragged out of the looming recession with subsidies and fiscal stimulus by reminding that the problems are linked to global demand for exports.

“The subsidies are but a band-aid for this overall problem,” he characterised.

He estimated that the country has nevertheless succeeded fairly well in tackling the acute crisis with, for example, business subsidies, which in light of the exceptional circumstances have understandably not been distributed completely equally between businesses.

“Of course people are annoyed if public funds are allocated inaccurately or wrongly. It’s worth keeping in mind, though, that at the end of the day the sums we’re talking about are quite small compared to the losses of the whole national economy. Minister of Finance Katri Kulmuni (Centre) has mentioned the need to borrow 20 billion euros more; 120 million euros worth of restaurant subsidies isn’t terribly much compared to that.”

Virén, in turn, identified spending cuts as the only way forward for Finland.

“I think there’s only one option: cuts,” he wrote in a blog on Puheenvuoro on Saturday. “Finland is the most expensive country in the euro area. Its expensive nature cannot be by chance; it has to be the result of the cost strain that is the ultimate outcome of a too heavy public-sector burden.”

“From this perspective, it feels idiotic to call for tax increases that further increase the cost burden. But all taxes that affect prices end up one way or another in wages and thereby in competitiveness, which as it is is no cause for celebration. It may feel harmless to impose additional taxes on housing, but the reality is that housing costs in Finland are the third highest in the OECD,” he added.

A professor of economics at the University of Turku, Virén ran for a seat as a candidate of the Finns Party in the European Parliament in 2019.

Both Virén and Wahlroos also voiced their disagreement with the conclusions of a report published last Friday by Vesa Vihriälä, a professor of practice at the University of Helsinki. The report identified three stages of economic policy-making for the near future: minimising the damage while bringing the coronavirus epidemic under control, promoting demand following the lifting of restrictions and fixing the economic damage and stabilising the public economy after the crisis.

“We don’t need, nor can we afford, to make even bigger public investments,” countered Wahlroos. You can’t pull yourself up by the hair. We need productive private investments directed at industries and technology.”

Finland, he stressed, has no shortcuts to success but has to take action to improve the operating preconditions of businesses providing employment and making investments. The solutions, therefore, are found in labour costs, employment terms and conditions, and labour and corporate taxes.