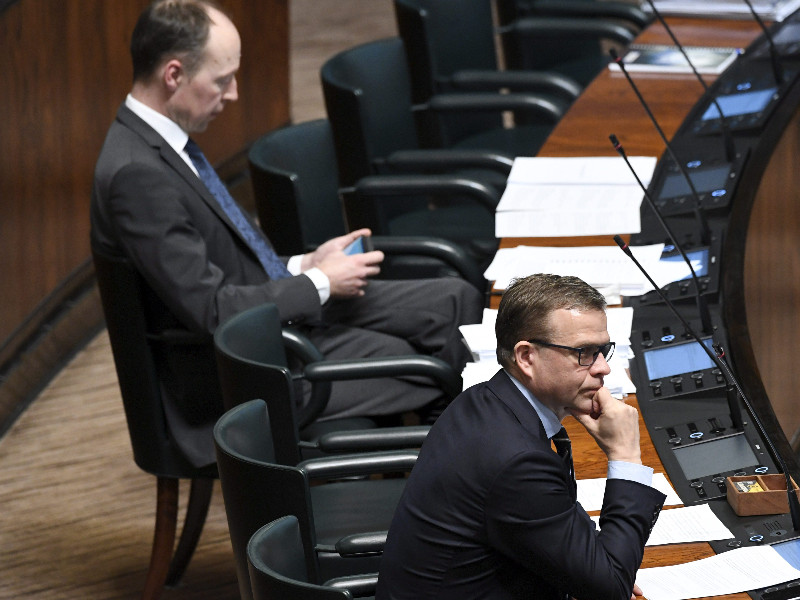 Opposition leaders Jussi Halla-aho (right) and Petteri Orpo have urged the Finnish government to adopt clear numerical goals in determining the necessary extent of measures to slow down the spread of the new coronavirus. (Heikki Saukkomaa – Lehtikuva)

THE RELEASE of a government report sketching a composite strategy for managing the coronavirus epidemic has provoked a series of critical comments from experts from different fields in Finland.

Many on Tuesday pointed out, for example, that the report appears to refer to herd immunity despite not mentioning the term once in its 104 pages.

Drafted by a task force headed by Martti Hetemäki, the permanent secretary at the Ministry of Finance, the report states that it is unlikely that any of the vaccines currently under development will be completed in time to have a substantial impact on the first wave of the pandemic.

“Suffocating the epidemic permanently is therefore not a realistic option for Finland,” it reads. “Controlled but not excessive deceleration, which prevents the over-burdening of health care and the subsequent adverse health effects and over-mortality, is a strategic objective that can ultimately allow us to lift all restrictions without a high risk of another wave of the epidemic.”

“Even if an infection does not provide lifetime immunity, it is probable that it provides at least a temporary immunity and protects against more serious forms of the disease over a longer period of time.”

Tuomas Aivelo, a post-doctoral researcher of evolutionary biology at the University of Helsinki, drew attention to the conflict between the strategic objective of preventing the virus from spreading and that of decelerating the epidemic not too excessively.

There is hardly any evidence, he highlighted, to suggest that even one per cent of the population has contract the virus.

He also voiced his bafflement with the failure to forward any concrete numerical targets for the relaxation of restrictions.

Prime Minister Sanna Marin on Monday stated that the government based its decision to lift some of the restrictions not exclusively on the reproduction rate (R0), emphasising that it is prepared to revisit its decisions regardless of the rate if the situation takes a sudden turn for the worse.

Also Martin Scheinin, a professor of international law and human rights at the European University Institute in Florence, Italy, described the report as a “major disappointment” on Twitter.

“The right to life and other human rights are currently under threat. There isn’t a single mention of herd immunity, but it is presented as an assumption based on which the strategy is devised,” he lamented.

Orpo urged Finland to follow in the footsteps of Germany, which according to him has effectively decided to maintain the reproduction rate between 1.1 and 1.2.

“I think there should be a clear numerical goal,” he said, explaining that the country could relax its restrictions if the rate dips below and ramp them up if the rate rises over the targeted level.

Halla-aho expressed his agreement but also reminded that the financial basis of the welfare state could reach a point where the economic inactivity becomes intolerable and it is necessary to relax the restrictions regardless of the reproduction rate.

“The starting point should absolutely be to have clear numerical goals,” he said.