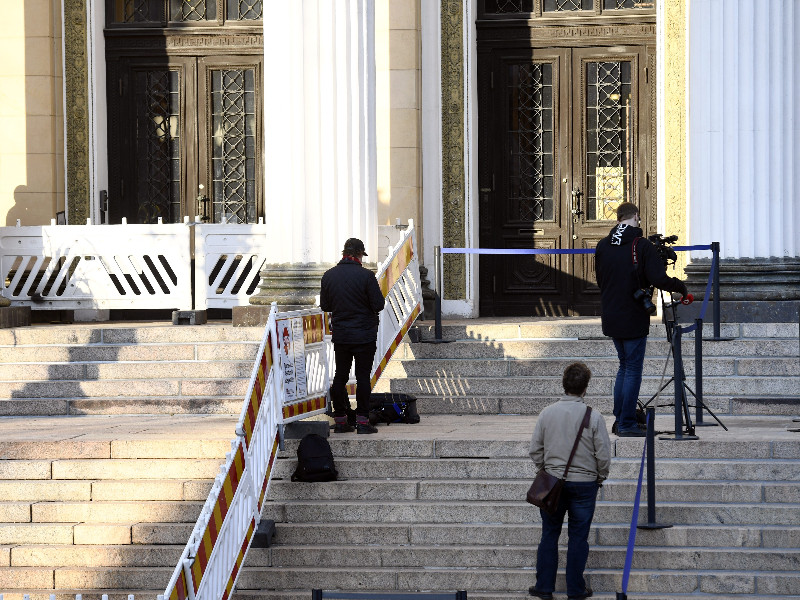 Members of the media waited for the government to wrap up its talks about the coronavirus epidemic on the steps of the House of the Estates in Helsinki on Sunday, 3 May 2020. (Emmi Korhonen – Lehtikuva)

THE GOVERNMENT of Prime Minister Sanna Marin is set to uphold the state of emergency declared over the coronavirus pandemic, reports Iltalehti.

Sources interviewed yesterday evening by the daily indicated that the government is eager to retain the possibility to order health care professionals to work and impose restrictions on internal movement if the epidemic exacerbates rapidly in some areas of Finland.

The government convened yesterday to discuss the epidemic and the possible relaxation or lifting of measures adopted to slow it down, such as the closures of cafés and restaurants, and libraries and other cultural facilities. Some of the counter-measures are set to expire on 13 May.

It will announce its conclusions in a press conference today.

Aki Lindén (SDP), a former chief executive of the Hospital District of Helsinki and Uusimaa (HUS), on Sunday viewed that the old saying of choosing between the plague and cholera is not a bad comparison as the government tries to strike a balance between measures containing the spread of the virus and preventing the economy from collapsing.

“The new normal could be the third road,” he wrote on Twitter. “The virus will stalk us until a vaccine has been completed. Widespread restrictions, behavioural changes, testing, isolations, quarantines and so forth are all aimed at reducing the incidence and spread further.”

The Finnish Institute for Health and Welfare (THL) has revealed that the number of laboratory-confirmed coronavirus infections increased by 78 to 5,254 between Saturday and Sunday. A day-on-day increase of 125 was recorded between Friday and Saturday.

The daily number of new infections appears to have stabilised at around 100.

Lasse Lehtonen, the director of diagnostic services at HUS, warned the government against recklessness when mulling over relaxing the measures.

“The summer holidays of schools will naturally work in our favour, but this does come with some risks. Despite improvements in the tracing of infections, not all transmitters are reached. The margin is very small for the epidemic bursting into growth, so caution is warranted when lifting the measures,” he stressed on Twitter.