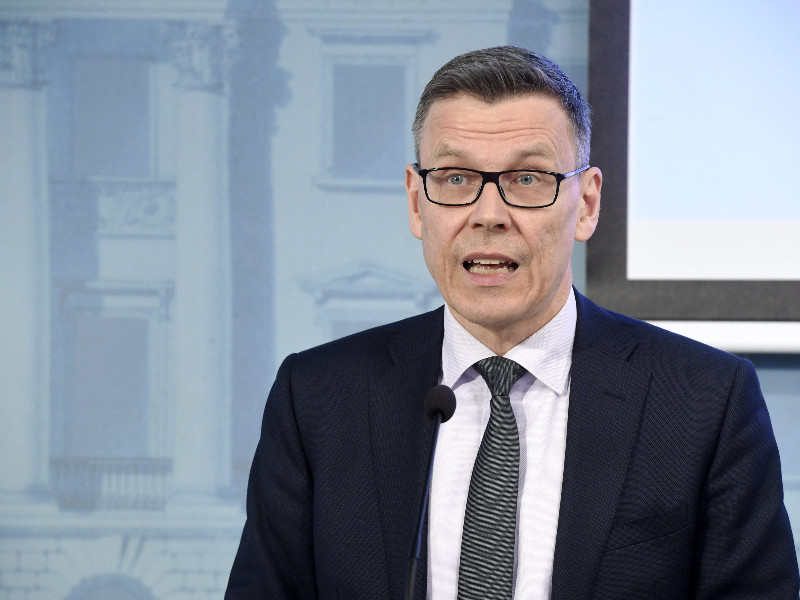 Mikko Spolander of the Ministry of Finance spoke at the release event of the ministry’s latest, bleak economic forecast in Helsinki on Thursday, 16 April 2020. (Heikki Saukkomaa – Lehtikuva)

THE FINNISH ECONOMY will contract by 5.5 per cent this year if the measures adopted to fight the coronavirus pandemic are in effect for no more than three months, indicates a forecast published on Thursday by the Ministry of Finance.

The Ministry of Finance on Thursday said it expects the central government budget deficit to widen this year by 14 billion to 16.6 billion euros, a sum that is equivalent to 7.2 per cent of the Finnish gross domestic product. The budget, it added, will continue to show a substantial deficit in the coming years as the expected economic growth will not suffice to restore the budgetary position.

Mikko Spolander, the head of the economics department at the Ministry of Finance, reminded that the longer the economy suffers, the harder it will be to revive it.

“Everything depends on how deep the economy will dive and how long the dive will last. There is a risk that the society runs out of oxygen if the economic dive drags on,” he phrased.

Devising an economic forecast is particularly difficult in the current circumstance due to the variance in estimates of how long the measures to combat the pandemic will remain in place, according to the Ministry of Finance.

The calculation demonstrates how extending the duration of counter-measures that curtail economic activity not only deepen the economic recession, but also prolong it by ravaging more of the production capacity.

“If this were to happen, the economic recovery would be very slow,” it said.

Economic forecasts have darkened strikingly in recent weeks, even though the uncertainty associated with the duration of counter-measures has prompted many forecasters to publish several alternative scenarios.

Etla Economic Research, for example, estimated last month that the epidemic and measures taken to slow it down would eat away one to five per cent of the gross domestic product of Finland. The Helsinki-based research institute has since stated that the situation has taken a turn for the worse on many indicators, despite the recent talk about the possibility of re-opening the economy.

Markku Lehmus, the chief of forecasting at Etla, on Wednesday said the Finnish economy is “very likely” to contract by at least five per cent this year, as the economic recovery is not expected to start until the final quarter of the year.

Public debt, meanwhile, is to rise well above 70 per cent of output and the unemployment rate to over nine per cent, according to Lehmus.

The Finnish Confederation of Professionals (STTK) on Thursday reported that over a quarter (27%) of employers have already completed or launched consultative negotiations with their staff due to the epidemic.

“Almost a half of the companies have taken advantage of the short negotiating period introduced for the duration of the coronavirus crisis. The cash flow of many companies has dried up quickly due to weak demand, and expediting the negotiations has certainly come in handy for many companies,” said Katarina Murto, the chairperson of STTK.

“For employees, this has led to a rapid and sudden drop in income. This is why it is crucial to ensure the processes of TE Offices and unemployment funds work and benefits are paid quickly.”