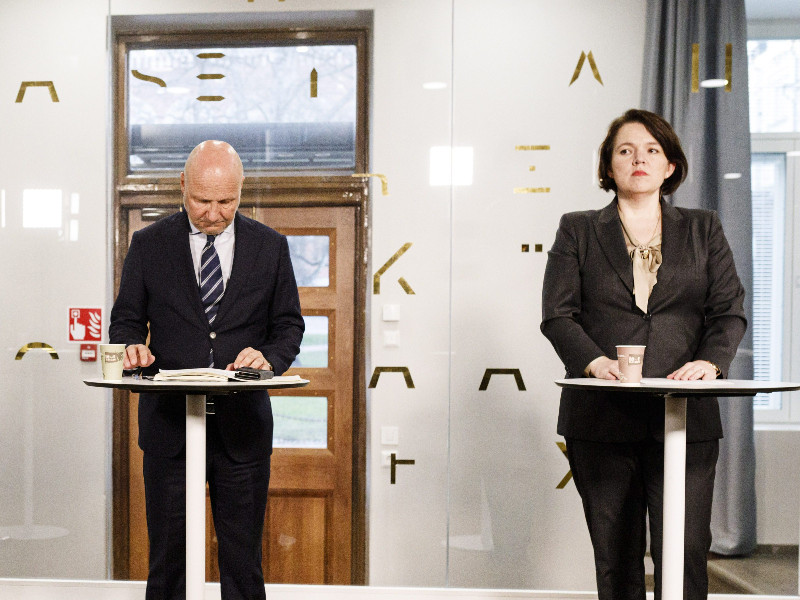 Jari Gustafsson (left), the permanent secretary at the Ministry of Employment and the Economy, and Ilona Lundström, the board chairperson at the National Emergency Supply Agency (HVK), prepared for a press conference in Helsinki on Tuesday, 14 April 2020. (Roni Rekomaa – Lehtikuva)

THE NATIONAL EMERGENCY Supply Agency (HVK) on Tuesday announced it has asked the police to open a pre-trial investigation into Onni Sarmaste, the businessman whom it paid almost five million euros for surgical and respirator masks.

The first batch of masks was shown to be unfit for hospital use soon after its arrival in Finland on Tuesday, 7 April.

HVK on Tuesday said it has initiated the process of cancelling the transaction partly, demanding a full refund for the products yet to be delivered and a partial refund for the 230,000 respirator and two million surgical masks that arrived a week ago on a charter flight from China. The first batch accounted for roughly a third of the total order.

“The delivered protective equipment do not correspond with the contents of the order placed by HVK and [the Ministry of Social Affairs and Health],” its press release reads.

Ilona Lundström, the board chairperson at HVK, stated in a press conference that the police have been asked to determine whether the businessman has committed fraud by selling the sub-standard masks.

“The products seem to have been faulty both in terms of quality and quantity,” she summarised.

HVK, she added, has ordered protective equipment for the needs of health care professionals combatting the coronavirus outbreak from Sarmaste and Tiina Jylhä, a Finnish entrepreneur with a history of economic crimes. The former received an advance payment of 4.98 million euros for the full order and the latter one of 2.65 million euros for half of the order, according to Helsingin Sanomat.

Jylhä’s funds have been frozen on her bank account in Estonia.

Also Finland’s National Bureau of Investigation (KRP) revealed before being asked to investigate the transaction that it has frozen around two million euros worth of funds related to “suspicious business activity”.

HVK submitted its report on the already notorious dealings yesterday to the Ministry of Employment and the Economy.

Lundström insisted that the report does not corroborate the claim made by Sarmaste on MTV’s Uutisaamu on Tuesday. Sarmaste stated to the media company that the ministry used erroneous product codes in its order.

The report does, however, indicate that the acquisitions did not comply with the financial regulations, rules of procedure and regular procurement processes of HVK, reported Helsingin Sanomat.

“The nature of these instances of negligence is such that the urgency and workload caused by the coronavirus crisis do not make them any more acceptable,” summarised Jari Gustafsson, the permanent secretary at the Ministry of Employment and the Economy.

“This was the sum of many factors, the outcome of very unfortunate choices,” added Lundström.