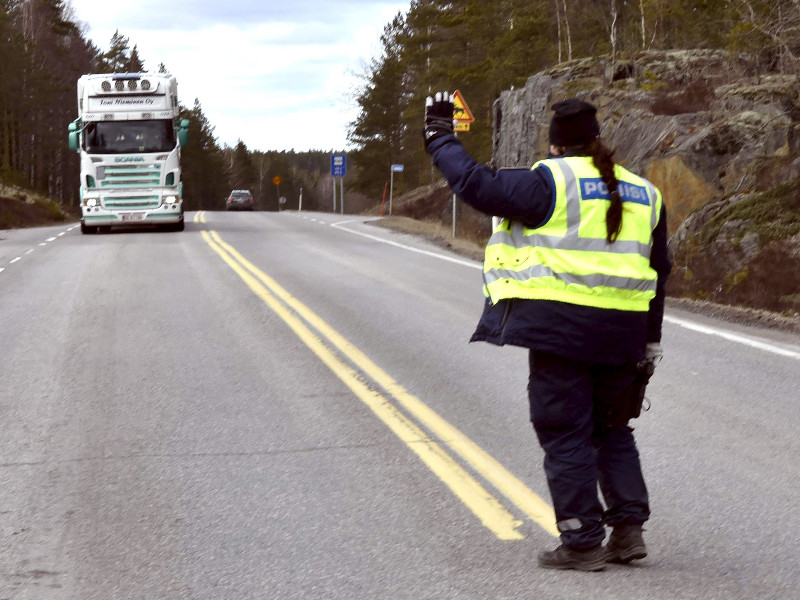 A police officer stopping a lorry on the border of Uusimaa in Perniö on Thursday, 9 April. The over 1.6-million-resident region was was locked down over two weeks ago to slow down the spread of the new coronavirus. (Jussi Nukari – Lehtikuva)

FINNISH AUTHORITIES are currently scrutinising the latest data on the coronavirus epidemic to determine whether it is necessary to extend the restrictions put in place to slow down the epidemic, indicate media reports.

The Ministry of Social Affairs and Health and Finnish Institute for Health and Welfare (THL) conducted an overall assessment of the situation on Sunday.

“We’re planning on presenting the ministers an assessment memo prepared by officials tomorrow,” Kirsi Varhila, the permanent secretary at the Ministry of Social Affairs and Health, revealed to YLE and Helsingin Sanomat.

The government, she added, will likely publish the memo on Tuesday.

The Finnish Institute for Health and Welfare (THL) has reported that the number of laboratory-confirmed coronavirus cases rose by only 69 from the previous day to almost 3,000 on Sunday. Almost two-thirds (1,850) of the cases have been reported by the Hospital District of Helsinki and Uusimaa (HUS), according to Helsingin Sanomat.

Finnish experts and policy makers engaged in a debate yesterday on whether the latest statistics seem encouraging due to the relatively low number of tests conducted over Easter.

“Very few patients have been tested over Easter,” highlighted Lasse Lehtonen, the director of diagnostic services at HUS. “The Tornio-Haaparanta situation is a good indicator of the impact of movement from a higher-morbidity to lower-morbidity area. Opening Uusimaa would bring the nearby regions closer to it in terms of the coronavirus incidence.”

HUS, he added, analysed only 488 samples for the virus on Saturday. “Testing is still going on 24/7 in HUS, but sample collection at various sites isn’t – except for emergency services,” said Lehtonen.

Epidemiologist Maarit Leinonen reminded that Uusimaa remains well ahead of the rest of the country in terms of the spread of the new coronavirus.

“Regions saw an inflow of tourists from ski resorts and tourists arriving at airports directly from risk areas even after the restrictions were adopted. These people are only starting to develop symptoms and show up as infections,” she said.

Her assessment was echoed by Marjukka Myllärniemi, a professor at the heart and lung centre of HUS. “The gut feeling of a clinician is […] that the rest of the country is still waiting for a surge in patients. Again, I wouldn’t mind being wrong about this.”

Many also drew attention to the situation in Länsi-Pohja Hospital District, which currently has the second highest number of infections relative to population after Uusimaa. The incidence of the new coronavirus in the region rose from 48.1 to 74.6 per 100,000 residents between 7 and 12 April.

The hospital district covers the cities of Kemi and Tornio, as well as the municipalities of Keminmaa, Simo, Tervola and Ylitornio, in south-west Lapland.

“Länsi-Pohja’s figures on the coronavirus situation have more than doubles in five days. That’s alarming news. We really do need stricter restrictions on the border with Sweden,” said Aki Lindén (SDP), a former chief executive of HUS.