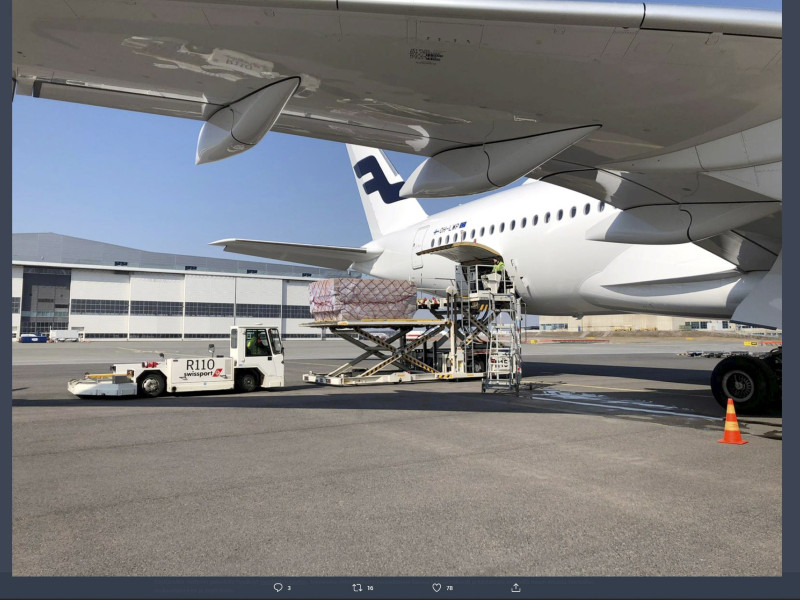 Tomi Lounema, the CEO of the National Emergency Supply Agency (HVK), on Tuesday tweeted a photo of the first shipment of masks arriving at Helsinki Airport from China. The masks were later shown not to meet the standards for hospital use. (HVK)

THE NATIONAL EMERGENCY Supply Agency (HVK) has made a multimillion-euro agreement to purchase face masks from a company that has marketed them with a fake CE certificate, reports Helsingin Sanomat.

Tomi Lounema, the CEO of HVK, on Thursday stated in a press conference that the agency has made a five-million-euro purchase agreement with The Look Medical Care.

The Estonia-based personal care industry company is headed by Tiina Jylhä, a Finnish entrepreneur with convictions of serious economic crimes, pending charges for aggravated offences and an extensive recent history of debt enforcement. Jylhä told the newspaper that her company is set to deliver the protective equipment to Finland on 20 April.

Half of the purchase price has been paid to a bank account in Estonia. Reports in the Estonian media suggest the funds have been frozen because the transaction raised red flags in the bank.

While the certificate as such is genuine, it was in reality issued to another company and therefore fake. The real recipient of the certificate is Dongguan Arun Industrial Co., Ltd.

Also experts interviewed by the daily newspaper estimated that the document is fake, saying the name of the alleged recipient has been clearly pasted on the document.

Jylhä told Helsingin Sanomat in a text message that “the certificate is genuine, but the name of the factory is not disclosed in marketing, which is why it has been covered with our logo”. Anyone, she added, “can order the masks we’re marketing for testing if they want to” and “the buyer will always also get the original certificates”.

Arun, the name of the original recipient of the certificate, is also mentioned as the trademark in the fake document.

The real recipient of the certificate can be ascertained from the register of Shenzhen STA Testing. The Chinese laboratory notes in the resource that its tests indicate that the face masks of Arun conform with the requirements laid out in the personal protective equipment regulation of the European Union.

Lounema of HVK on Thursday said the agency has also agreed on a five-million-euro acquisition of protective equipment with Onni Sarmaste, another entrepreneur with a history of financial discrepancies.

The first shipment of over two million surgical masks and 230,000 other respirator masks arrived in Finland from China on Tuesday. VTT Technical Research Centre of Finland has conducted tests on the masks, ruling that – contrary to expectations – they do not meet European standards for hospital use.

Lounema said HVK failed to due its due diligence before agreeing to the acquisition, revealing that it is looking into the possibility of nullifying the agreement.

Suomen Kuvalehti on Wednesday revealed that the already infamous acquisition has kindled a clash between the two entrepreneurs. Jylhä has accused Sarmaste of swindling the money to himself; Sarmaste has accused Jylhä of trying to steal from him and sending members of a biker gang to collect the money from him.

Minister of Employment Tuula Haatainen (SDP) on Thursday said she has requested a report on the acquisition from HVK. The report is to be presented to Haatainen on Tuesday, 14 April, according to Lounema.