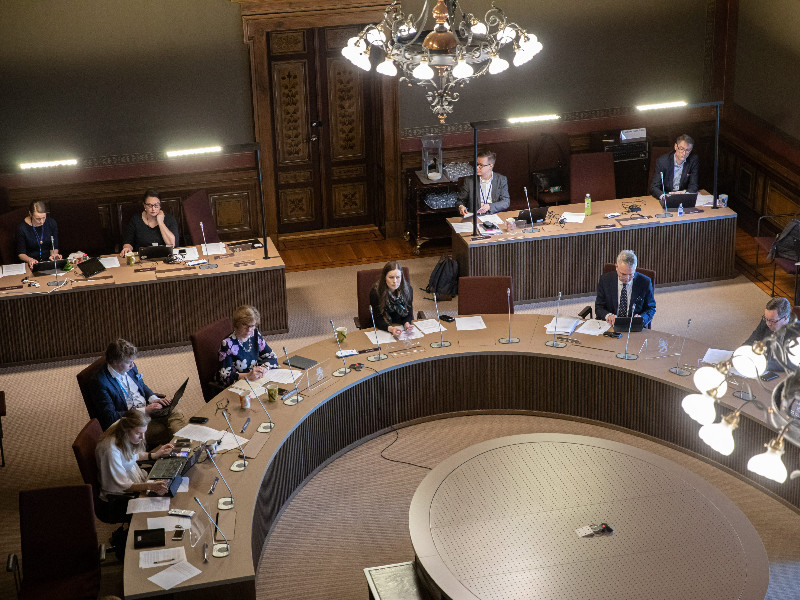 The coronavirus pandemic was the main focus of attention as the government convened for its framework session at the House of the Estates in Helsinki on Wednesday, 8 April. (Lauri Heikkinen – Office of the Finnish government)

THE FINNISH GOVERNMENT on Wednesday decided to set aside an additional 3.6 billion euros for benefits, subsidies and other forms of financial support necessitated by the coronavirus pandemic.

Most of the financial support is to be directed at municipalities and businesses.

Prime Minister Sanna Marin (SDP) said in a press conference yesterday that municipalities will, in the first phase, be compensated for the temporary loss of tax revenue caused by the pandemic and, in the second, receive direct subsidies from the state.

Around 1.5 billion euros will be earmarked for social security expenses and 600 million euros for the equipment and medication procurements of the National Emergency Supply Agency (HVK).

Katri Kulmuni (Centre), the Minister of Finance, revealed that the government is proposing that parents who have been on unpaid leave to be at home with an under 10-year-old children be allowed to apply for a monthly benefit of 723 euros. A total of 94 million euros is to be budgeted for the temporary benefit.

“This is a very significant decision,” she said.

The benefit would also be available to people who lose income due to being ordered into quarantine after returning from abroad, according to Helsingin Sanomat.

Business Finland would also be authorised to grant an additional 300 million euros in loans to businesses for evaluating and developing their operations in labour-intensive industries affected negatively by the outbreak.

Finnish Industry Investment (Tesi) is to be granted 150 million euros for capitalising a new stability programme designed to the tackle liquidity problems of medium-sized businesses. The capital injections of 1–10 million euros would be made in businesses with annual revenues of at least 10 million euros that have faced sudden and temporary challenges due to the pandemic.

A 600-million-euro guarantee scheme is to be launched for shipyards. An additional 30 million euros is to be set aside for agricultural and 10 million euros for fishery businesses.

The government is also to support culture and sports with 60 million euros, with two-thirds of the total allocated for compensating for loss of ticket and other forms of revenue in the field of culture and arts.

The Ministry of Finance on Wednesday said it expects the Finnish economy to contract this year by 5.5 per cent due to a simultaneous decline in export and domestic demand. The economic impact of the pandemic, however, is expected to weaken and the economy to begin its recovery in the second half of the year.

The forecast is based on the assumption that the measures hindering economic activity will be in place for no more than three months. Estimates of how long the measures are needed are still associated with considerable uncertainty, a ministry spokesperson reminded.