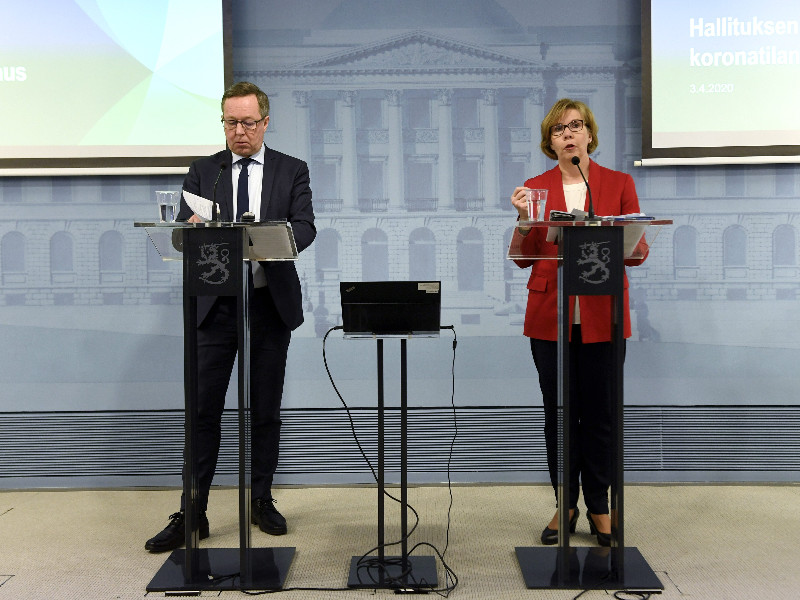 Minister of Economic Affairs Mika Lintilä (left) and Minister of Justice Anna-Maja Henriksson gave an update on the effects of the coronavirus epidemic in a press conference in Helsinki on Friday, 3 April 2020. (Vesa Moilanen – Lehtikuva)

THE ECONOMIC FALLOUT of the coronavirus pandemic will come in three distinct waves, views Mika Lintilä (Centre), the Minister of Economic Affairs.

Lintilä on Friday stated in a press conference that the first wave will hit the self-employed and small and medium-sized enterprises, the second also larger business owners and the third major corporations.

The second wave has already struck, with the third already on the horizon, according to him. “There’ll hopefully also be a fourth wave, and it’ll pull us out of the crisis.”

The Finnish government, he stated, is constantly considering what measures are needed to enable companies to withstand and recover from the crisis. He also pleaded with lessors who have yet to provide any economic relief to their business tenants, voicing his displeasure with the reasoning that the government is already intent on compensating for rent costs.

“I’m not exactly excited about the prospect of foreign property investors being the ones who end up getting tax euros from Finland,” he said.

Lintilä expressed his gratitude to the numerous of lessors who have set a good example by taking the exceptional circumstances into consideration and shouldering some of the burden on business tenants.

Minister of Finance Katri Kulmuni (Centre) on Saturday told Helsingin Sanomat that the economic fallout of the pandemic could be worse than that of the 1990s recession.

“At least people were going out and shopping at the time,” she highlighted, confirming that the national economy has never contracted as dramatically as due to the pandemic and measures introduced to combat it.

“Whatever the case, the collapse will be one of the worst in the history of Finland,” she conceded. “Government debt will become a two-digit figure when measured in billions. If the first figure is two and we manage to keep industries going, then we’ll survive somehow.”

Kulmuni reminded that although no one yet knows how long the pandemic will force economies around the world to shut down, the public can do its part by adhering to the instructions and restrictions.

“If it drags on for considerably more than three months, it’ll be the end of many sorts of economic activity. And that doesn’t only go for Finland, but also for Germany and other countries. Everyone can have an impact on the restrictions’ duration by obeying the orders and restrictions. It’s already looking like they’ve had an impact.”