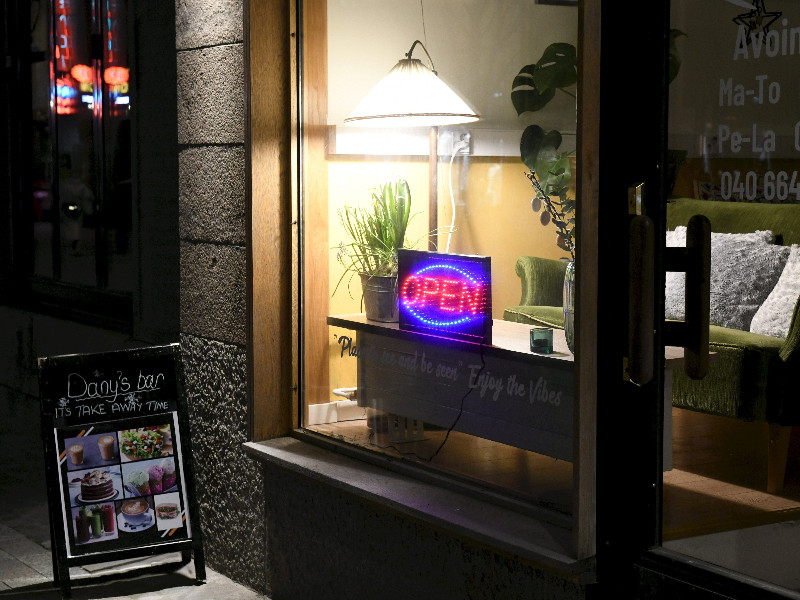 A restaurant advertising takeaway food on Iso Roobertinkatu in Helsinki on 27 March 2020. Slumping demand, coupled with the prospect of strict restrictions on operations, has already seen a number of restaurants temporarily lay off staff, according to Mara. (Heikki Saukkomaa – Lehtikuva)

THE NUMBER of Finns who could be laid off, temporarily or permanently, due to the coronavirus outbreak is growing by the day, with an estimate released at the start of this week indicating that employers are in consultative talks with as many as 280,000 employees.

The companies that have announced consultative negotiations include Altia, Fiskars, Konecranes, SSAB and UPM, according to Helsingin Sanomat.

Around 12,700 employees have already been temporarily laid off and 4,900 made completely redundant due to the pandemic, according to the Ministry of Economic Affairs and Employment.

Jukka Palokangas, the chief economist at the Federation of Finnish Technology Industries, on Monday said if the crisis ends up being similar to the most recent financial crisis in terms of its employment impact, it would mean that around 350,000 employees would be affected by temporary lay-offs and 175,000 made completely redundant.

“This is a risk that should be taken seriously enough,” he underlined.

Statistics Finland has reported that the employed accounted for 2,534,000 of the 3,452,000 people who were part of the labour force in February in Finland. The employment rate, therefore, stood at 73.4 per cent.

The Finnish government, he stressed, must learn from the financial crisis and do whatever it can to ensure companies stay afloat: “If you again only help companies modestly to survive the coronavirus crisis, the risk of temporary lay-offs becoming widespread lay-offs would be high,” he said.

Palokangas pointed out that the pandemic and financial crisis differ in terms of the order in which they are affecting industries.

While the financial crisis ravaged export-oriented companies and their supply chains in 2008–2009, it had a considerable lesser impact on companies in the private service sector. The pandemic, by contrast, has first hit companies operating mostly in the domestic markets, such as speciality retailers, and accommodation, restaurant and tourism businesses.

“The biggest impacts on export industries, their subcontractors and construction will become visible a bit later,” he told.

Researchers: Up to 50% of restaurants and tourism companies may not survive

The Finnish Hospitality Association (Mara) has described the situation as a watershed moment for the hospitality and restaurant industry, as its members are expected to temporarily lay off virtually all their employees.

“Our member companies employ 70,000 people. 60,000 have already been temporarily laid off, and next week nearly everyone will be,” said Timo Lappi, the managing director at Mara.

The tourism and restaurant sector provides employment to an estimated 140,000 people in Finland. Researchers at Aalto University have warned that the sector could witness a wave of bankruptcies, saying 39–50 per cent of the companies could become insolvent in less than a month without outside support in the current circumstance.

Lappi said the estimate is harsher than calculations made by Mara.

It would be a hole that could not be filled overnight.

Lappi stated that the fate of the sector depends on two questions: will the government offer direct subsidies to the companies and will lessors around the country be willing to lower their rents for the duration of the pandemic?

“If this cannot be done, the situation is truly awful. The sector would be faced with a harder re-adjustment in terms of unemployment than in the recession of the 1990s,” he estimated.

The sector would not be on a solid footing after the pandemic has begun to subside even if companies received relief in the form of direct subsidies and reduced rents, as their cash reserves would be low while employees would be due wages and holiday bonuses.

Lappi encouraged lessors to follow in the footsteps of the City of Helsinki, which has exempt all restaurants and other food service providers from rents between April and June. Not all lessors are as sympathetic, however.

“Social responsibility should extend beyond words,” he pleaded.