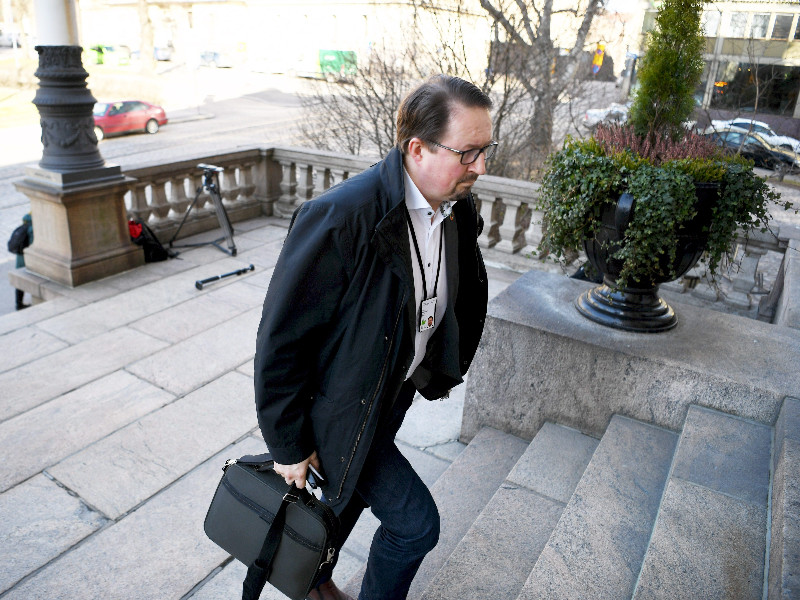 Mika Salminen, the head of health security at THL, was photographed arriving for a meeting of the ruling parliamentary groups at the House of the Estates in Helsinki on Tuesday, 24 March 2020. (Antti Aimo-Koivisto – Lehtikuva)

THE FINNISH INSTITUTE for Health and Welfare (THL) has updated its projections for the coronavirus epidemic in Finland.

The new projections offer both good and bad news for the country, according to Helsingin Sanomat. It appears, on the one hand, that the virus is spreading more rapidly than expected despite the counter-measures and, on the other, that the number of people needing intensive care will be much lower than expected.

Mika Salminen, the head of health security at THL, stated to YLE on Wednesday that the counter-measures have reduced contact between people by 25 to 50 per cent, depending on the location and population group, but that has not contained the virus sufficiently.

THL on Wednesday published two scenarios for the spread of the new coronavirus based on modellings of the basic reproduction number conducted in collaboration with the University of Turku.

Both numbers are higher than the estimate of 1.4 published by THL on 18 March.

The more optimistic scenario would mean that around 11,300 people require hospital care and 3,600 of them intensive care due to symptoms caused by the virus, known officially as Covid-19. Slightly more than 900 of them would be in hospital care, including 280 in intensive care, simultaneously during the peak of the epidemic.

Finland currently has an intensive care capacity of roughly 300 and is capable of raising it to 1,000.

The less optimistic scenario, in turn, would mean that around 15,500 people require hospital care and 5,000 of them intensive care due to the coronavirus. The number of people requiring intensive care simultaneously during the peak of the epidemic would rise to 500, said Kari Auranen, a professor specialising in epidemic modellings at the University of Turku.

THL highlighted that it the natural infectivity and transmission rate of the virus remain unknown.

Auranen pointed out that the basic reproduction number is believed to have stood at slightly over three before the adoption of strict counter-measures in Lombardy, Italy. Almost 4,500 people have died of the virus in the region, according to Reuters.

Tuija Leino, a chief physician at THL, reminded that the projections will be specified as new data on the spread of the virus becomes available. The current ones, she added, are based on the age distribution of coronavirus patients in France.

Leino told YLE that around 40 per cent of the public are expected to contract the virus despite the counter-measures in the coming months, reminding that the main purpose of the measures is to limit social contact for the most vulnerable population groups, such as over 70-year-olds.

“Of course the restrictions are important. If we hadn’t done anything, we’d be heading towards the same situation as in Lombardy, Italy,” she stated to the public broadcaster.

THL on Wednesday also said it expects the epidemic to last four to six months, adding reminding that its projections for the timing of the epidemic’s peak do not apply to the entire country due to regional differences in the spread of the virus.