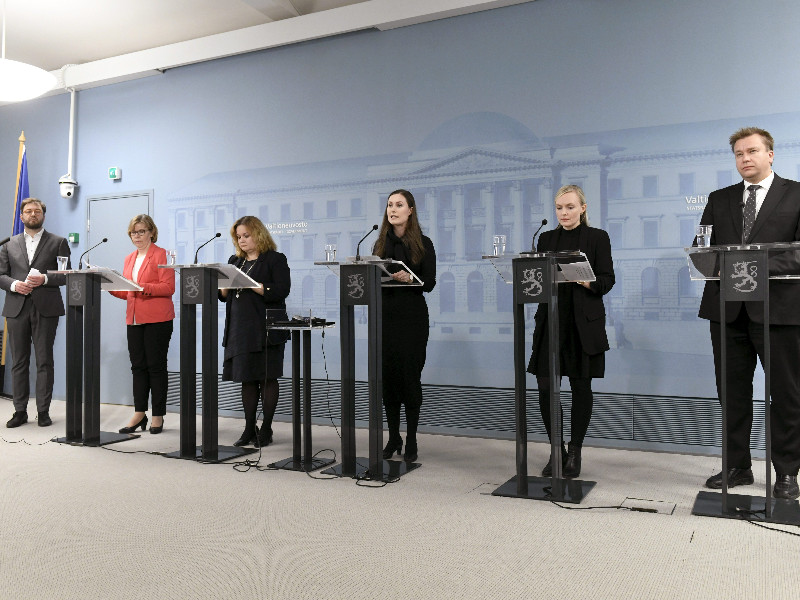 Six of the Finnish government’s 19 ministers were present as the government announced strict restrictions to movement in and out of Uusimaa, the most populous region in Finland, in a bid to curb the spread of the new coronavirus in Helsinki on Wednesday, 25 March 2020. (Heikki Saukkomaa – Lehtikuva)

THE FINNISH GOVERNMENT has decided to prohibit all unnecessary travel in and out of Uusimaa, the most populous region in Finland.

The almost 1.7-million-resident region is to effectively be quarantined from the rest of the country for three weeks in order to reduce movement and social contact and, therefore, curb the spread of the new coronavirus, known officially as Covid-19.

The restriction will not apply to authorities performing official duties and citizens moving in or out due to the death of a family member, to realise the right of a child to meet the parent with whom he or she does not reside or for another material reason. People will also be allowed to cross the border for reasons related to work, business activity and elected positions, as well as to return to their home municipality or municipality of residence.

“Free-time travel is not such a reason,” stated Prime Minister Sanna Marin (SDP).

Marin estimated yesterday in a press conference that the restriction to the freedom of movement could be in effect between Friday, 27 March, and Sunday, 19 April. Minister of the Interior Maria Ohisalo (Greens) said the intention is to have the police enforce the restriction as soon as it has been approved by the Finnish Parliament.

The Finnish government reminded in its press release that the emergency powers act grants the police the right to issue fines to people who violate or fail to comply with the restriction. Police officers will also be allowed to ask people to provide a reason or purpose for their movement.

The Finnish Defence Forces will be ready to assist the police in traffic control tasks, according to Minister of Defence Antti Kaikkonen (Centre).

Marin on Wednesday urged Uusimaa residents who have travelled to a cabin or holiday home in another region to return home in order to ensure the health care capacity of small localities is not overwhelmed.

“I’d strongly urge everyone to return home,” she pleaded.

Many Finns are believed to have re-located to their cabin or holiday home after the government instructed employers to encourage as many employees as possible to work remotely.

Minister of Family Affairs and Social Services Krista Kiuru (SDP) reiterated that the quarantine is necessary because the coronavirus epidemic has spread especially rapidly in Uusimaa. The Hospital District of Helsinki and Uusimaa (HUS) has reported almost two-thirds (561) of all coronavirus infections in Finland, according to Helsingin Sanomat.

“We don’t want the whole of Finland getting ill at the same time,” summarised Anna-Maja Henriksson (SFP), the Minister of Justice.

Order to close bars, cafés and restaurants not expected until next week

Marin yesterday also revealed that the government will require more time before issuing the recently announced order to bars, cafés and restaurants to close their doors to all non-takeaway customers, as the order cannot be issued on grounds of the emergency powers act.

She nevertheless pleaded with such establishments to close their doors to eat-in patrons.

“I’m strongly pleading with you to make sure we don’t witness another weekend where pubs and night clubs are open,” she stated.