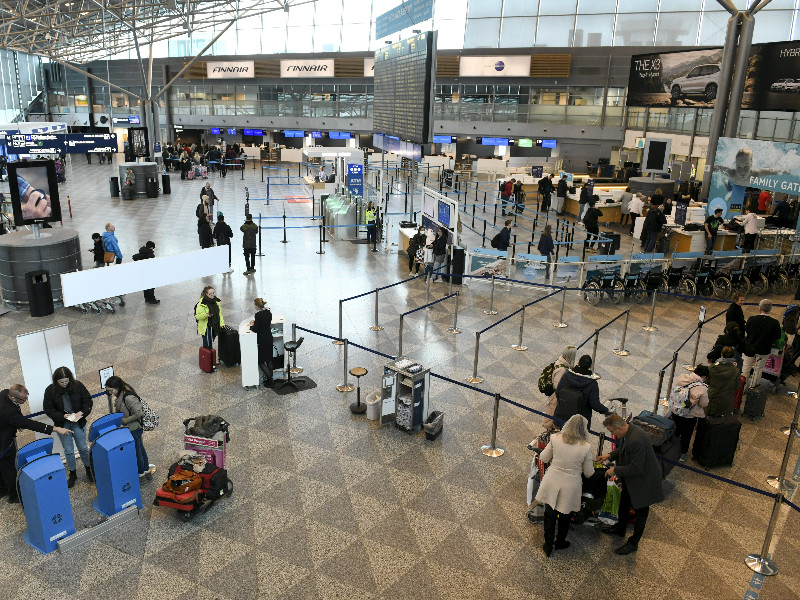 Travellers in Terminal 2 of Helsinki Airport on Wednesday, 18 March, a day before the Finnish government shut down borders to all non-essential traffic. (Heikki Saukkomaa – Lehtikuva)

THE INSTRUCTIONS, orders and recommendations of authorities to combat the coronavirus pandemic have had a visible impact on traffic volumes in Finland, reports Traffic Management Finland.

The state-owned traffic management agency revealed yesterday that the situation has had an impact not only on air travel, but also on rail and road transport.

Road vehicle volumes had plummeted by around 30 per cent by Monday, 24 March, in Pirkanmaa, Uusimaa, South-east Finland and South-west Finland. The decrease was approximated by comparing data from all traffic sensor stations in each of the regions to the average vehicle volume between Monday, 2 March, and Friday, 6 March.

Vehicle volumes had dropped sharply, by around 22–28 per cent, already last Thursday and Friday.

“Finns have, for the most part, taken the action recommendations for preventing the coronavirus [from spreading] seriously,” analysed Mikko Saariaho, the chief impact officer at Traffic Management Finland.

“For instance, the increase in remote work is visible in the everyday movement of people,” he added.

Cancellations announced by transport companies have reduced traffic also on railways and sea routes, according to Traffic Management Finland. The volume of commuter rail traffic was 15 per cent lower and that of long-distance rail traffic 24 per cent lower between 16 and 20 March than between 9 and 14 March.

The most substantial decline, however, has been recorded in air travel, with the number of arrivals and departures falling sharply toward the end of last week following a decision to temporarily shut down borders to all non-essential travel on 19 March.

Helsinki Airport, for example, had 71 per cent fewer flights than one year ago on Sunday, 23 March. The airport is one of only three airports that continue to have international operations in the country, along with Mariehamn Airport and Turku Airport.

“The coronavirus situation has had the greatest impact on the volume of air travel, which has forced the entire industry to adjust its operations,” summarised Saariaho.