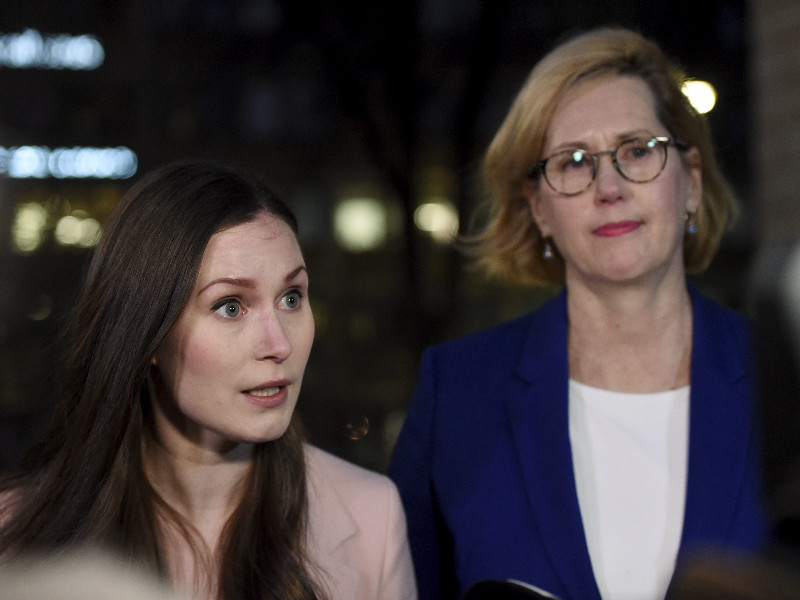 Prime Minister Sanna Marin (left) and Minister of Employment Tuula Haatainen announced strict restrictions to the operations of bars, cafés and restaurants on the steps of the House of the Estates in Helsinki on Tuesday, 24 March 2020. (Emmi Korhonen – Lehtikuva)

CAFÉS, RESTAURANTS AND NIGHT CLUBS in Finland will soon have to close their doors to all non-takeaway customers under a government proposal that was fast-tracked to the Parliament on Tuesday.

“Restaurants can’t stay open to customers who stay there to eat,” Tuula Haatainen (SDP), the Minister of Employment, described the gist of the proposal in a makeshift press conference outside the House of the Estates.

The proposal will have no impact on the operations of company canteens and restaurants.

Prime Minister Sanna Marin (SDP) said the proposal was drawn up quickly to ensure the restrictions can come into effect “as soon as possible” and facilitate the fight against the new coronavirus by reducing contact between people.

The restrictions will stay in effect until 31 May 2020. The government, however, is “definitely” prepared to lift them earlier if the situation takes a turn for the better, assured Marin.

Helsingin Sanomat on Tuesday revealed that the restrictions could come into effect as soon as on Saturday, 28 March.

Members of the Finnish Parliament were unanimously supportive of the need to shut down restaurants, although many – especially members of the opposition parties – urged the government to do more to support businesses hit by the restrictions, according to the daily newspaper.

“The government is ready to shut down the entire industry but has yet to come up with a package to support it,” said Ville Kaunisto (NCP).

Marin on Tuesday promised that the government will continue its effort to identify measures to support companies affected by the restriction.

The government acknowledged in its decision that the restrictions will “likely” complicate the financial situation of restaurants in already difficult circumstances. Allowing sales to takeaway customers, it said, is a way to both enable restaurants to continue their operations in a limited capacity and increase the availability of food.

Members of the National Coalition also asked the government why it chose to order restaurants to shut down under the constitution rather than the act on communicable diseases, as the latter would have offered better guarantees to restaurants in the event of suspension of operations.

The government was yesterday also expected to unveil new restrictions to movement and the possible quarantine of Uusimaa, which has become the epicentre of the pandemic in Finland. The Hospital District of Helsinki and Uusimaa (HUS) has accounted for over two-thirds of the almost 800 coronavirus cases reported in the country.

Further measures to slow down the epidemic are set to be announced today.