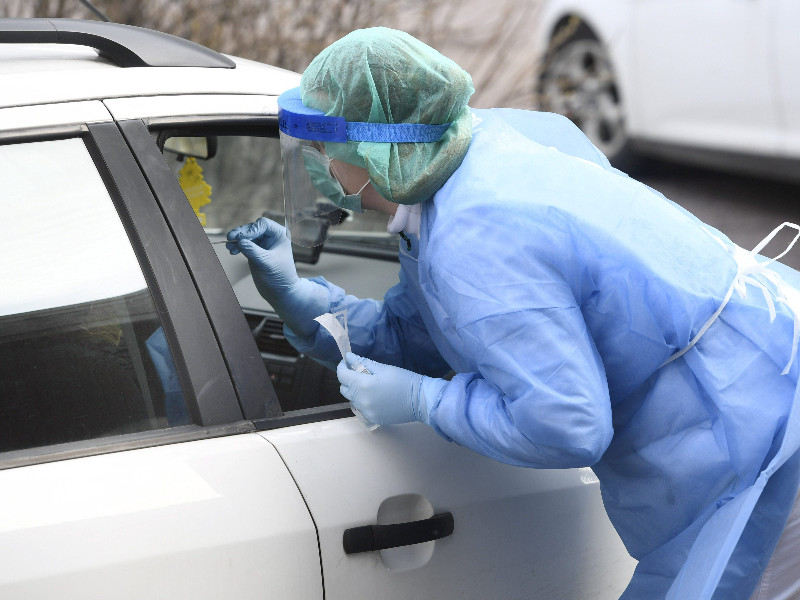 An employee collecting a sample at a drive-in station set up for health care professionals by Mehiläinen and the Finnish Institute for Health and Welfare (THL) in Helsinki on Wednesday, 18 March 2020. (Heikki Saukkomaa – Lehtikuva)

DIFFERENCES in the Covid-19 projections of the Finnish Institute for Health and Welfare (THL) and World Health Organization (WHO) have stirred up concerns among public health experts and members of the public in Finland.

THL has founded its scenario-based forecasts on the assumption that “a considerable share” of the public will contract the virus but “a relatively small share” will experience serious symptoms.

The projected number of hospitalisations seems optimistic in light of the estimate published by the World Health Organization (WHO).

WHO states in the questions and answers section of its coronavirus website that even though the new coronavirus generally only causes a mild illness, especially in children and young people, around a fifth of the infected will require hospital care. In Wuhan, China, for example, roughly 13.8 per cent of laboratory-confirmed cases experienced serious symptoms and roughly six per cent required intensive care, indicates its report from the first epicentre of the pandemic.

There is no principal difference between the two estimates, Jussi Sane, a chief specialist at THL, wrote in an e-mail to Uusi Suomi on Wednesday.

“If you calculate the share of [seriously] ill people of all infections, you get a lot smaller number than for all detected infections.”

His analysis was echoed by Kari Auranen, a professor specialising in the mathematical modelling of epidemics at the University of Turku.

“The Finnish modellings start off from the assumption that the infection may be caught by a lot larger group, who possibly have no symptoms or only have minor symptoms, than the group of people who are ‘detected’. How many have been detected depends on how you look for them and who you test,” he stated to Uusi Suomi.

Also the government drew attention in its report on the epidemic to the difference between the morbidity rate per infection and per case, citing the figures reported from Wuhan by China.

In Italy, for example, the total number of infections is certainly higher than the number of reported cases, and the majority of unreported cases are likely mild or asymptomatic, according to Sane.

WHO has contrastively pointed out that asymptomatic cases were rare and many of them eventually became symptomatic in Wuhan, China. Although the share of truly asymptomatic carriers remains unknown, it seems to be “fairly low,” it wrote in late February.

“Test is not a cure”

The need for and benefits of testing is another contested issue.

Helsingin Sanomat on Thursday revealed that roughly 1,100 people – mostly elderly people, people with serious chronic illnesses and health care personnel – were tested for the new coronavirus in Finland on Wednesday. The number of tests conducted is well below the total capacity (1,400) of the eight laboratories conducting the tests.

“We’re not doing as many tests as possible every day but doing them based on need,” said Mika Salminen, the head of health security at THL.

Aino-Kaisa Pekonen (Left Alliance), the Minister of Social Affairs and Health, on Thursday revealed the government aims to increase the testing capacity but will continue to place priority on guaranteeing access to care and treatment.

The purpose of the increase is simply to ensure the capacity is enough for people in need of hospital care and health care personnel, summarised Salminen.

“We’re talking about samples from the respiratory tract, whose processing takes time. The samples also have to be transported to the nearest laboratory that’s capable of analysing them,” he explained to Helsingin Sanomat.

“The test is not a cure,” he added. “It’s perfectly understandable that people are concerned about their health, but the resources must be allocated to areas where they have the greatest impact, not where there are concerns. Those who can be at home with the illness have nothing to gain from the test.”

He confirmed that even if the country managed to overcome the hurdles related to the availability of test kits and, more importantly, the availability of health care staff capable of conducting the tests, the plan is not to shift to widespread testing.

WHO, meanwhile, has repeatedly drawn attention to widespread testing as a key means, along with restrictions on social contact and movement, to controlling the epidemic.

Salminen viewed that widespread testing is advantageous in circumstances where it is still possible to break the chain of infection, such as when the virus began to spread among the members of a religious group in South Korea. Even in South Korea, the much-lauded effort has not been a complete success, according to him.

He said the approach would be clearly less beneficial in Finland, where the total number of infections is estimated to be 20–30 times higher than the number of confirmed cases.