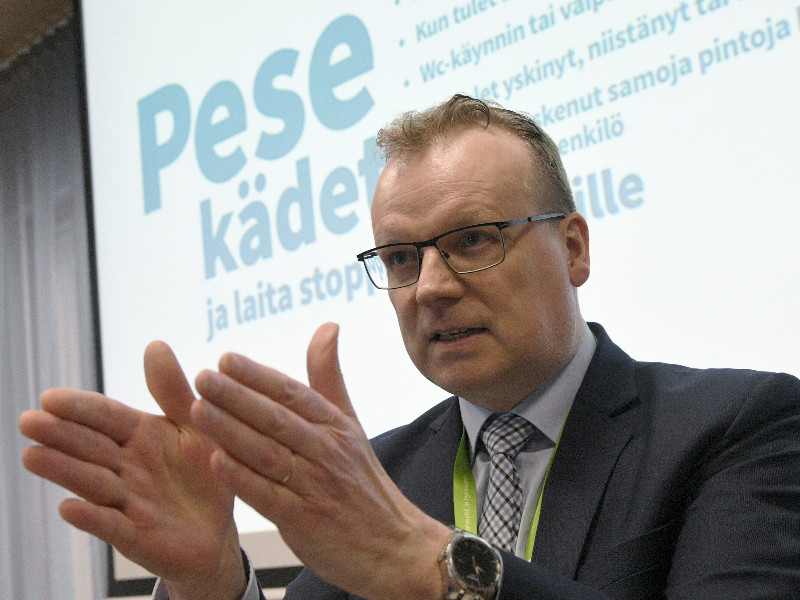 Markku Tervahauta, the director general of THL, gave an update on the coronavirus situation in Finland in Helsinki on Friday, 13 March 2020. (Markku Ulander – Lehtikuva)

THE FINNISH INSTITUTE for Health and Welfare (THL) has admitted that the coronavirus is “on the brink” of becoming an epidemic also in Finland.

THL on Friday reiterated in a press conference that its objective has shifted from preventing to slowing down the spread of the virus as much as possible – an objective that is supported by a variety of orders, instructions and recommendations.

Markku Tervahauta, the director general at THL, also called attention to estimates that around 35 per cent of the population could contract the virus, reminding that the infections are not expected to take place simultaneously and that the majority of the patients are only expected to experience mild symptoms.

“It’s the responsibility of other facets of society to slow down the progress of the epidemic,” said Tervahauta. “In order not to overburden the health care system, it’s necessary to make the kind of decisions that the government made yesterday.”

“We have to really take seriously the fact that the instructions of authorities aren’t effective unless the public follows them widely,” he added, pointing to instructions to avoid shaking hands, staying at home with flu-like symptoms and steering clear of large events and gatherings.

THL on Friday also issued another list of instructions for limiting contact with other people and containing the coronavirus epidemic.

No one, it said, should go to work, school or kindergarten feeling ill or unwell. Employers should cut down on meetings and cancel all business trips not essential for the future of the business.

Citizens, meanwhile, should avoid large crowds and events, refrain from participating in group hobbies and keep distance to other people also during outside activities. People should also refrain from visiting elderly and sick friends and relatives in person, not invite grandparents to take care of an ill child and, overall, keep in mind the importance of hand-washing and general hygiene.

A total of 155 coronavirus cases have now been confirmed in Finland, according to THL.