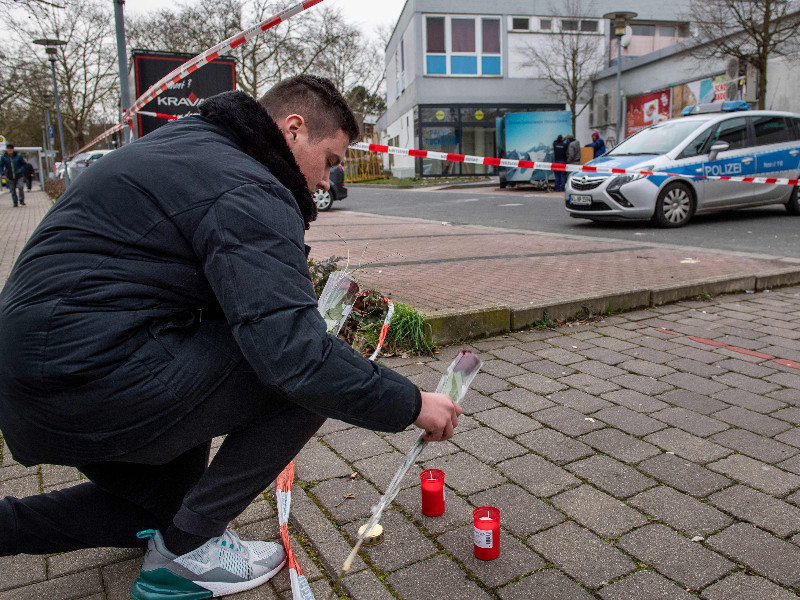 A man lays candles and flowers in front of one of the bars targeted in a shooting in Hanau, Germany, on 20 February 2020. (Thomas Lohnes – AFP/Lehtikuva)

THE WHOLE of Europe should be alarmed by the rise of far-right organisations in the wake of the shootings that claimed the lives of nine and wounded four in Hanau, Germany on Wednesday, says Nils Duquet, a senior researcher at The Flemish Peace Institute in the Netherlands.

Duquet on Thursday highlighted to Deutsche Welle that far-right attacks differ from other mass shootings in that they are typically carried out with legally obtained firearms.

“It seems like the perpetrator had a hunting permit,” he said, pointing to reports about the shootings in two shisha bars in the late hours of Wednesday. “What police forces have been noticing across Europe is that […] far-right extremism is on the rise and that these people can have access to guns both legally and illegally.”

The suspected gunman was later found dead in his home together with another body, later identified as his mother.

The shootings are being investigated as acts of terror. German Attorney General Peter Frank has stated that the suspect had posted material online that “showed a deeply racist mind”.

The incident has provoked discussion also in Finland. President Sauli Niinistö has expressed his condolences to both the families of the victims and the Federal President of Germany, Frank-Walter Steinmeier.

Ville Niinistö (Greens), a Member of the European Parliament, echoed Duquet’s assessment by viewing that violent far-right extremism is a serious and growing threat in Europe.

“We must finally start to take this seriously. Islamic terrorism is condemned by all political movements, but some still belittle the threat of racist far-right activity,” he commented on Twitter on Friday.

“Far-right terrorism is a threat to us all,” added Paavo Arhinmäki, the chairperson of the Left Alliance Parliamentary Group.