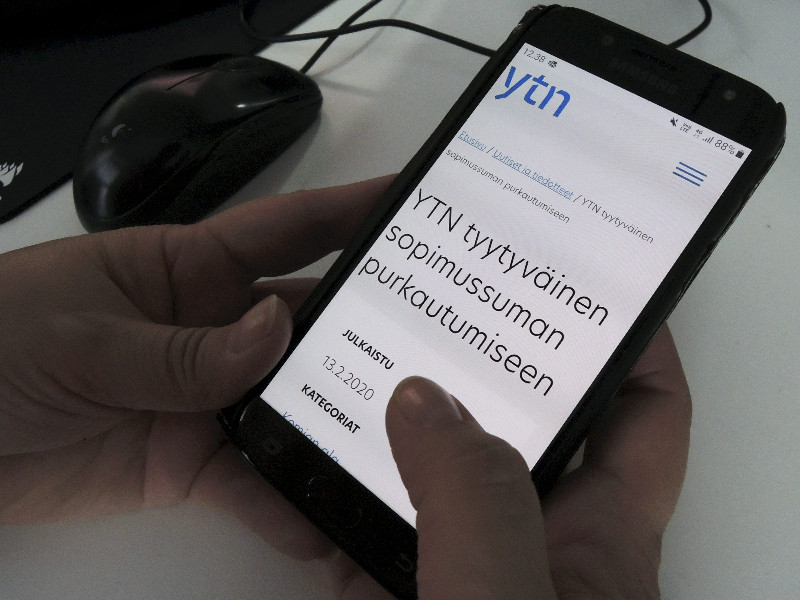 The Federation of Professional and Managerial Staff (YTN) voiced its satisfaction with the new collective bargaining agreements for its members in a press release published on its website on Thursday, 13 February 2020. (Teemu Salonen – Lehtikuva)

THE FEDERATION of Professional and Managerial Staff (YTN) has expressed its satisfaction with the positive conclusion of collective bargaining negotiations with the Technology Industries of Finland and Chemical Industry Federation of Finland.

The agreements will raise the wages of senior white-collar workers by 3.3 per cent over their term and remove the 24-hour increase in annual working time.

“I am pleased that the first agreements in a challenging round of union-specific negotiations have been found and the backlog can finally start to be cleared. The most important goal for our membership was met, as the competitiveness hours will be removed from the agreements to put an end to unpaid work,” said Teemu Hankamäki, the chairperson of YTN.

“The wage increases should maintain the purchasing power of senior white-collar workers in light of inflation forecasts.”

The first breakthrough was made in the negotiations with the Technology Industries of Finland. The agreement will cover more than 60,000 senior white-collar workers, making it the second-largest collective bargaining agreement in the manufacturing industry.

Petteri Oksa, the head of industrial relations at YTN, stated that he is pleased the parties were able to engage in constructive discussions throughout the months-long process despite the difficult premise and issues.

“This offers a good foundation for seeking solutions to issues we did not have an opportunity to discuss during this round and the new government does not tackle,” he said.

Also he identified the removal of the working-time increase as the most important detail of the agreement but viewed that it should offer benefits to both parties.

“The agreement offers more opportunities to agree on compensation for free-time travel and draws attention to occupational well-being. The removal of the competitiveness hours, on the other hand, will be offset by providing employers more tools to enhance flexibility,” elaborated Oksa.

A breakthrough in collective bargaining talks was also witnessed in the energy industry.

Finnish Energy, Trade Union Pro and Finnish Engineers’ Association similarly settled on an agreement that will raise wages by 3.3 per cent over 25 months and do away with the unpaid increase in annual working time.

The agreement also provides employers with more flexibility to organise work in order to create much-needed savings in season-specific construction and maintenance work in the energy sector.

Kari Laaksonen, the director of industrial relations at Finnish Energy, conceded that the negotiations were exceptionally difficult but voiced his satisfaction with the outcome that “significantly facilitates” flexible use of labour and creates cost savings.

“This has a major impact on the profitability of companies operating in the industry,” he summed up.

Jorma Malinen, the chairperson at Trade Union Pro, described the agreement as a reasonable solution to prevent the industrial actions from escalating in the prevalent circumstances.

“The agreement will lift the overtime ban introduced in the industry in February,” he added.