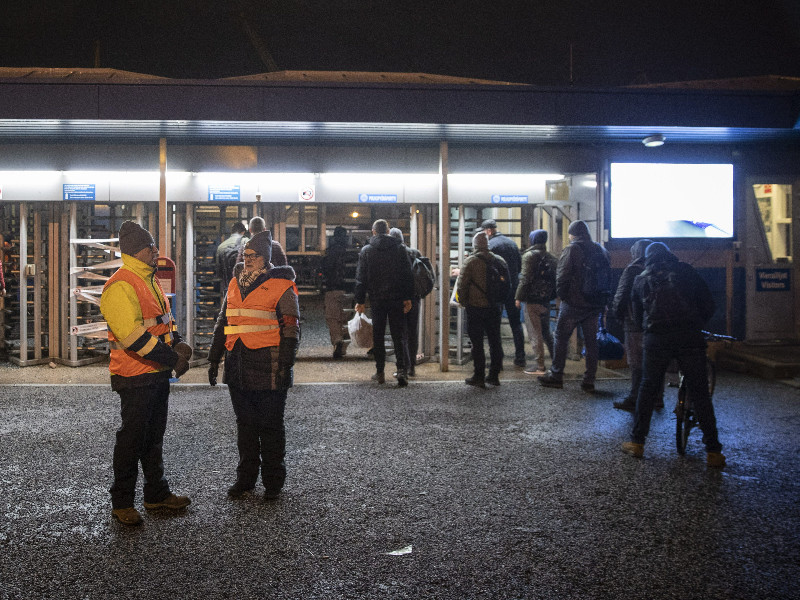 Members of Trade Union Pro picketing at the main gate of Meyer Turku on Monday, 10 February. The strike came to an end only hours after starting following a breakthrough in the talks between the trade union and the Technology Industries of Finland. (Roni Lehti – Lehtikuva)

TRADE UNION PRO and the Technology Industries of Finland on Monday found an agreement to their protracted wrangle over the terms and conditions of employment of white-collar workers in the technology industry.

The agreement puts an abrupt end to the strike and overtime ban launched by the 120,000-member union on Monday.

Jarkko Ruohoniemi, the head of bargaining at the Technology Industries of Finland, on Monday said in a press release it is crucial that an agreement was reached and the industrial actions did not drag on.

The new collective bargaining agreement will raise the wages of around 27,000 white-collar workers in the technology industry by a total of 3.3 per cent over its 25-month term, matching the increases laid out in earlier agreements for technology industry workers. The agreement, however, also places a greater emphasis on company and workplace-specific increases.

The Technology Industries of Finland said the primary objective is that the scope, timing and implementation of the increases are determined locally while taking into account the specific situation of each company. If a local agreement cannot be reached, the wages will be adjusted in accordance with the collective bargaining agreement.

Trade Union Pro on Monday said it is far from satisfied with the outcome and the inflexible approach to the negotiations taken by the employer organisation.

“The solution on working time is especially problematic. Working-time solutions that are better than the newly reached agreement are already in use at some large workplaces,” said Jorma Malinen, the chairperson of Trade Union Pro.

The trade union pointed out that the agreement will do away with the 24-hour increase in annual working time as laid down in the competitiveness pact but allows employers to make written agreements with chief shop stewards on extending the working time of white-collar workers by a maximum of 32 hours a year.

Such agreements must also specify the method of compensation and implementation.

Paper and pulp production to resume after over two-week strike

The agreement will do away with the 24-hour working time increase and raise the wages of employees by 3.3 per cent over its 25-month term, while putting a stop to strikes that had ravaged the chemical forest industry for more than two weeks.

“Everything is now set and we will start starting up the factories,” said Vanhala.

Jyrki Hollmén, the director of labour market affairs at Finnish Forest Industries, said the industry cannot be satisfied with the agreement because it will, at best, maintain the current level of competitiveness and fails to tackle the structural issues of the industry.

“We cannot be satisfied with the agreement as it fails to improve our competitiveness,” he told YLE on Monday.

Hollmén also viewed that the strikes cost the industry “way too much”.

Strikes in the mechanical forest industry are still ongoing as an agreement continues to elude the Industrial Union and Finnish Forest Industries. Attempts to resolve the labour dispute will continue at the office of the National Conciliator on Wednesday, 12 February.