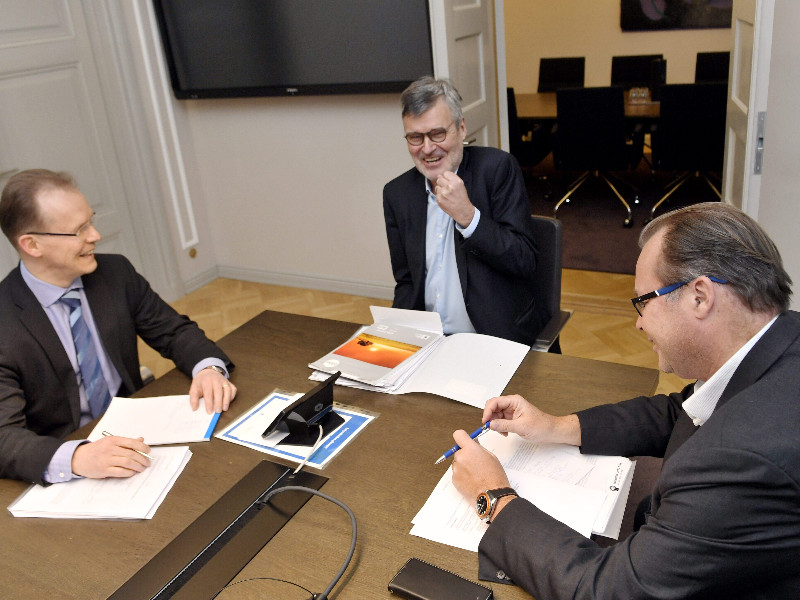 Jarkko Ruohoniemi of the Technology Industries of Finland (left) and Anssi Vuorio of Trade Union Pro (right) talked at the office of National Conciliator on 4 February 2020. (Vesa Moilanen – Lehtikuva)

TRADE UNION PRO has turned down a proposal to settle the long-running dispute over the terms and conditions of white-collar workers in the technology industry, saying the proposal fell well short of the agreements adopted in other industries.

The 120,000-member union announced it will subsequently extend and expand the scope of its strike targeting technology-industry companies.

The strike will cover all employees who fall under the scope of the current collective bargaining agreement for white-collar employees and last from 12am on 24 February until 11.59pm on 1 March.

Trade Union Pro on Friday said the settlement proposal would have introduced a number of negative revisions to the terms and conditions of its members, especially in regards to working time and its allocation.

“The so-called competitiveness hours would remain partly in the collective bargaining agreement so that the loss of income for white-collar workers would be even greater than with the current working-time orders. The employer would be able to, more freely than before, order white-collar workers to work without paying additional compensation,” explained Jorma Malinen, the chairperson at Trade Union Pro.

Malinen said the Technology Industries of Finland was seeking to unilaterally extend work shifts and allocate working time to, for example, public holidays without bonuses. The revisions could have translated to daily loss of income equal to up to 12 hours of wage to white-collar workers, according to him.

“In terms of wages, the first year of 1.3 per cent would have been fine by us, [but] the second year of 1.2 per cent and 0.8 per cent decided by the employer wasn’t to our liking. A bit of tweaking is needed,” Malinen summarised on Twitter.

The Technology Industries of Finland has voiced its disapproval with the rejection of the proposal, reminding that it would have offered employees wage increases of 3.3 per cent and done away with the 24-hour working time increase in its current form.

The much-discussed issue of working time, it added, would have been solved by introducing elements that increase flexibility and benefit white-collar workers.

“Pro’s decision to turn down the settlement proposal is very regrettable and the decision to expand the strike outright shameless,” said Jarkko Ruohoniemi, the director of bargaining at the Technology Industries of Finland.

Jaakko Hirvola, the chief executive of the Technology Industries of Finland, suggested that the reaction of the trade union is disproportionate.

“What’s needed is ‘a bit of tweaking’, so let’s bring the export industry to a halt and destroy jobs with strikes. Hello, is anybody home?” he said, referring to the earlier tweet by Malinen.