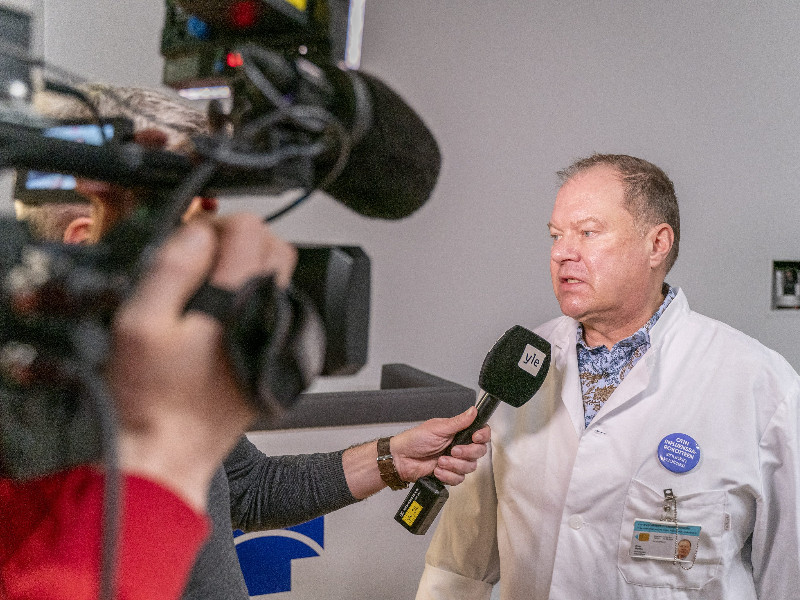 Markku Broas, a chief physician specialising in infectious diseases at Lapland Central Hospital, on Thursday provided an update of the condition of the first coronavirus patient in Finland. (Kaisa Siren – Lehtikuva)

THE FIRST CORONAVIRUS PATIENT in Finland is in good condition and has required no special treatment at Lapland Central Hospital, according to a press release from Lapland Hospital District.

Lapland Hospital District on Thursday said it now believes 24 people have been exposed to the virus for being in contact with the patient, a 32-year-old woman from Wuhan, China.

“The majority of them are foreigners, but the group also includes a few Finns. Exposure means that the person has been in close contact with the disease carrier for at least 15 minutes no more than two days before the symptoms started and lasted. Samples have been taken from two people who were exposed long term, whose results will likely be received on Friday,” the press release reads.

Finnish health authorities have reached some of the people believed to have been exposed to the virus and interviewed to assess their health status, but not all of them as they also include independent travellers whose “exact identity” has yet been determined.

“We are in contact with the exposed on a daily basis and will monitor their condition for 14 days,” the release reads.

Lapland Hospital District on Thursday said Lapland Central Hospital has already isolated a few of the people possibly exposed to the coronavirus and assured that it has the capacity to monitor and treat more patients in isolation or quarantine.

The National Institute for Health and Welfare (THL) has announced it will send an epidemiologist and a Chinese-speaking researcher to assist the hospital in Rovaniemi, Finnish Lapland.

The World Health Organisation (WHO) on Thursday declared the coronavirus outbreak as a public health emergency of international concern. The virus has been confirmed to infect almost 10,000 people worldwide and claimed the lives of 213 in China.

The outbreak is also having an impact on business.

Ilta-Sanomat on Thursday revealed that Finnair is no longer accepting new bookings for its flights to and from mainland China. The state-owned airline is expected to provide an estimate of the effects of the epidemic on its operations in conjunction with the release of its financial statement on 7 February.

Finnair declined yesterday to comment on how many travellers have cancelled their trips due to concerns about the virus. The airline has said earlier passengers who have booked trips trips for the period between 25 January and 23 February can postponed them until 31 May. They can also cancel the trips and request a refund, according to Helsingin Sanomat.

Also other tourism industry operators have expressed their concern with the situation.