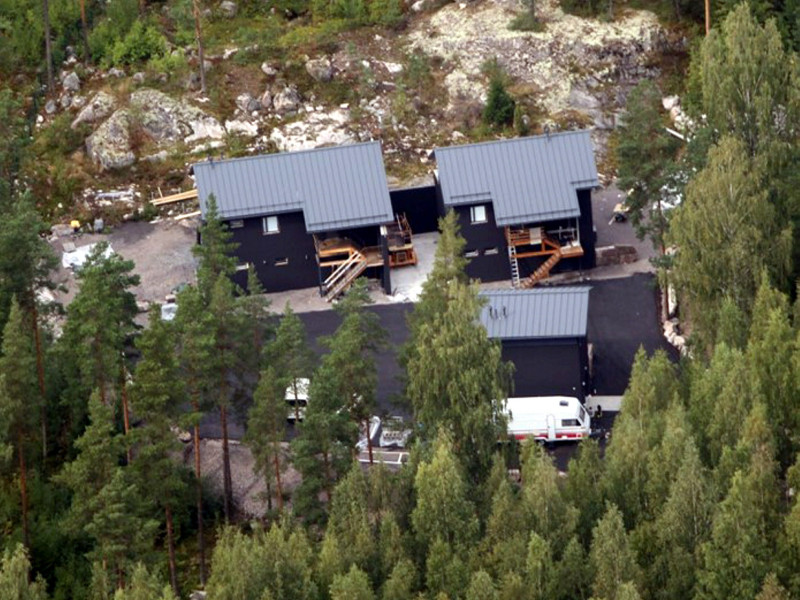 An aerial photo of a property that is believed to have been owned by the head of United Brotherhood, one of the most notorious criminal organisations in Finland. (Handout – Police of Finland)

THE NATIONAL BUREAU of Investigation (KRP) on Monday said it is close to wrapping up a massive pre-trial investigation linked to United Brotherhood, the most notorious criminal organisation in Finland.

Police carried out a series of raids in different parts of the country last autumn in connection with the investigation, seizing significant quantities of drugs and firearms.

KRP on Monday released video footage of a search conducted on a private premises in Porvoo, Southern Finland. The premises houses two large detached homes and a garage that are believed to have been built by the leader of the criminal organisation, a man born in 1972, in an attempt to conceal the origin of criminal proceeds.

The construction project is believed to have cost approximately 700,000 euros and been paid for primarily with criminal proceeds.

Kimmo Sainio, the detective chief inspector in charge of the pre-trial investigation at KRP, said the man is also believed to have controlled the drug use of other gang members, instructed them how to deal with authorities and been the de-facto beneficiary of offences committed by the criminal organisation.

“He is also suspected of seriously assaulting a member of the organisation for his remarks,” he added in a press release.

The case consists of more than 50 other suspects, 19 of whom have been affiliated with United Brotherhood or Bad Union. Many of the suspects are believed to have taken part in concealing the origin of the funds used to acquire the land and construct the detached homes and in disguising the real owner of the property.

Another video released yesterday shows the inside of a clubhouse of United Brotherhood in Tampere.

The gang boss is also believed to have been involved in the distribution of roughly 30 kilos of amphetamine, four kilos of which has been seized by police, and possession and distribution of over 1,000 ecstasy pills.

The offences are estimated to have generated over 500,000 euros in criminal proceeds.

United Brotherhood, the investigation indicates, also obtained firearms in a series of robberies around Finland in 2018–2019. The leader himself is suspected of having been in possession of 60 firearms, 55 of which have been confiscated by police and are valued at well over 200,000 euros.

The case will be forwarded to a prosecutor for consideration of charges by the end of January.

KRP on Monday also reminded that the investigation was launched as part of a nationwide crime prevention programme in 2018, which to date has resulted in the recovery of around 2.7 million euros in criminal proceeds.