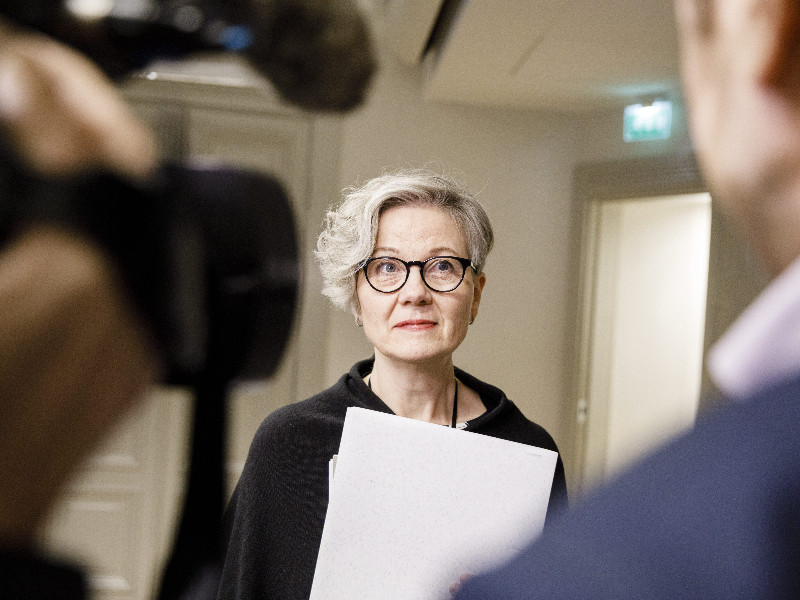 National Conciliator Vuokko Piekkala spoke to the media about the collective bargaining talks between the Industrial Union and Technology Industries of Finland in Helsinki on 29 November 2019. (Seppo Samuli – Lehtikuva)

TUOMAS AARTO, director of Service Sector Employers (Palta), and Jyri Häkämies, director of the Confederation of Finnish Industries (EK), have expressed their disapproval with the criticism levelled at National Conciliator Vuokko Piekkala.

Piekkala has come under criticism from trade unions after announcing she will defend the so-called general scope for wage increases in future mediations.

“The general scope will be defended,” she said in a joint interview with Kauppalehti and Uusi Suomi on Thursday, 16 January. “This isn’t my personal decision, but a decision that aligns with the mediation system.”

The scope for wage increases for the ongoing round of collective bargaining agreement was established at the beginning of the month by the Industrial Union and Technology Industries of Finland. The labour market organisations agreed to raise wages in the technology industry by 3.3 per cent over the 25-month term of the collective bargaining agreement.

Piekkala on Thursday also stated that she will not call for the removal of the 24 hours added to annual working time as part of the competitiveness pact but will allow the negotiating parties to discuss the issue.

Her comments have provoked the ire of trade unions. STT on Saturday reported that some trade unions have even discussed the possibility of replacing the national conciliator.

Also Erkki Tuomioja (SDP), a former Minister for Foreign Affairs, has questioned whether the conciliator as an institution is capable of serving its purpose of mediating labour disputes and fostering positive relations between employers and wage earners.

“I wonder if this job description is met today? I’m just asking. I’ll also point out that I haven’t had to ask this question earlier.”

Aarto expressed his disapproval with the criticism.

“It’s tragicomic that there are calls to overhaul the mediation system as soon as the activity isn’t to your liking. The same people are simultaneously opposing reforms to the industrial peace system tooth and nail. The end result is that we’re still toothless when faced with paragraphs dating back to 1946 in Finland,” he lamented.

Häkämies, in turn, urged all stakeholders to both focus on the ongoing round of collective bargaining negotiations and consider why it has proven so difficult to find common ground between labour market organisations.

“The conciliator can’t be a candy shop,” he underlined.

Jarkko Eloranta, chairperson of the Central Organisation of Finnish Trade Unions (SAK), reminded that SAK floated the idea of revamping the institution of national conciliator already in 2018.

“This isn’t something we came up with yesterday. You’d think it’d be in the best interests of both parties that the system is trusted and produces results,” he said.