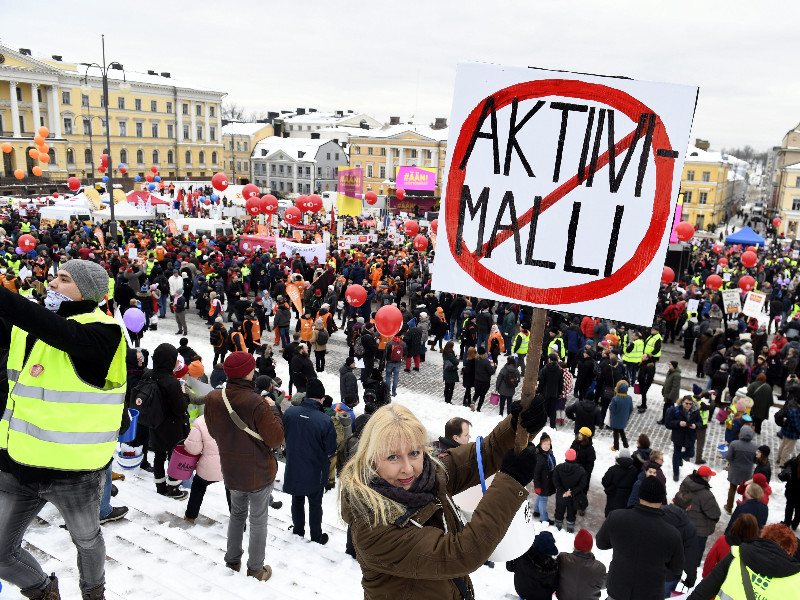 A protest against the activation model for unemployment security brought thousands of people to the Senate Square in Helsinki on 2 February 2018. (Martti Kainulainen – Lehtikuva)

THE STRIKE WARNINGS issued on last weekend have triggered a heated debate between labour market organisations over what has been agreed in regards to the 24-hour working-time increase adopted as part of the competitiveness pact in 2017.

Mikael Pentikäinen, the chief executive of the Federation of Finnish Enterprises, viewed that the debate is evidence of the non-functioning of the Finnish labour market system.

“The right to agree differently is needed to make sure it’s genuinely possible to bargain at the workplace, the importance of collective bargaining agreements is reduced and companies can pave the road to success through internal agreements,” he stated on Twitter on Sunday.

His tweet was directed at Jarkko Eloranta, the chairperson of the Central Organisation of Finnish Trade Unions (SAK), and Ilkka Oksala, the head of labour market affairs at the Confederation of Finnish Industries (EK). Eloranta and Oksala had talked about the issue after the former viewed that the working-time increase has become as big an obstacle as expected in the ongoing collective bargaining talks.

Oksala estimated that the wrangle demonstrates that nothing related to collective bargaining agreements should be agreed centrally.

“This should finally show everyone hankering after centralised income policy agreements that you should agree centrally on anything that is to be carried out in collective bargaining agreements. Labour market confederations originally agreed permanently on the competitiveness hours, but introducing them to bargaining agreements proved difficult also three years ago,” he reminded.