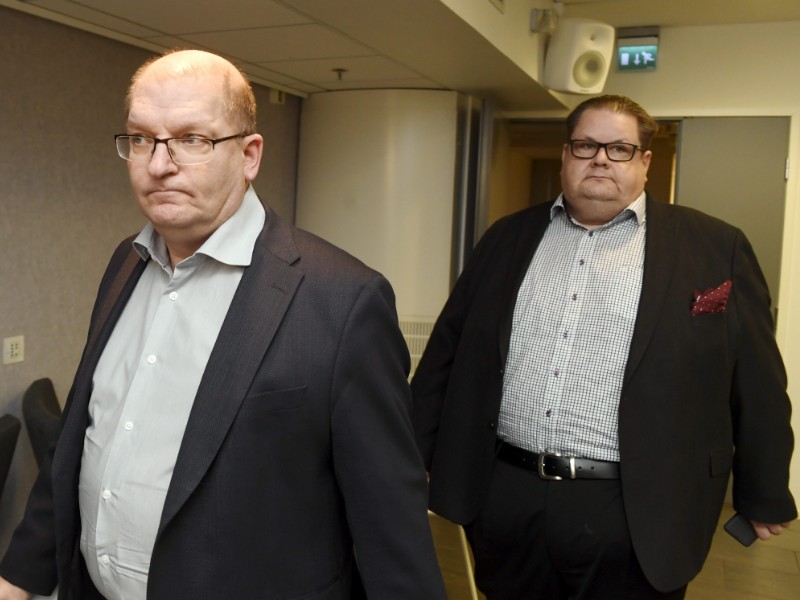 Riku Aalto (left) and Turja Lehtonen of the Industrial Union arriving for a press conference staged following the conclusion of collective bargaining talks in the technology industry in Helsinki on Saturday, 4 January 2020. (Vesa Moilanen – Lehtikuva)

THE INDUSTRIAL UNION and Technology Industries of Finland have settled their long-running dispute over the terms and conditions of employment in the technology industry.

The newly approved collective bargaining agreement will guarantee employees in the industry an increase of 3.3 per cent in wages, bonuses and compensations over its 25-month term, according to a press release from the Industrial Union.

“The time of unpaid working hours is over as far as the technology industry is concerned,” Riku Aalto, the chairperson of the Industrial Union, commented in a press conference on Saturday.

He reminded that the outcome of the protracted negotiations represents a significant improvement from the settlement proposed by National Conciliator Vuokko Piekkala in December. Her proposal would have raised wages by 2.4 per cent over the roughly two-year term – a level that was insufficient for the Industrial Union.

Aalto described the 3.3 per cent-increase as a reasonable compromise and reminded that bolstering the purchasing power of employees was one of the primary objectives for the Industrial Union.

“We had long and partly difficult bargaining negotiations. The result is a wage increase that for its part guarantees the positive development of purchasing power for our members without endangering the competitiveness of Finnish industries,” he said.

Minna Helle, the head of labour market affairs at the Technology Industries of Finland, said the 3.3 per cent-increase is not an ideal but tolerable compromise for businesses and the employment situation.

“It was important to find an agreement to appease the labour markets. The cost level is not ideal for employment, but we can live with it,” she commented on Twitter on Saturday.

Aalto, however, identified the removal of the 24 unpaid hours added to annual working time in the competitiveness pact as the single most important accomplishment for the Industrial Union.

“We set ourselves the objective of getting rid of the hours in the competitiveness pact. They’ve been a very touchy issue among our membership, so it’s good that we’ve now gotten rid of the hours,” he stated.

Turja Lehtonen, the deputy chairperson of the Industrial Union, on Saturday confirmed that repealing the increase in annual working time was the primary reason for finding a breakthrough in the collective bargaining negotiations.

The talks in other industries are not expected to be straightforward, given the variety of ways in which the working-time increase was implemented.