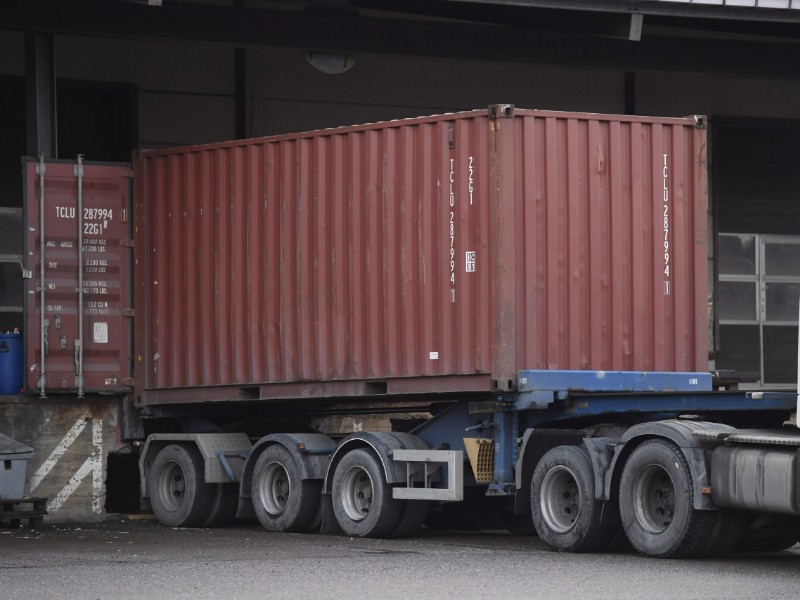 A large but unspecified amount of drugs, presumably cocaine, was discovered in a shipping container on an industrial site in Espoo on 16 December 2019. (Vesa Moilanen – Lehtikuva)

OFFICERS at Western Uusimaa Police Department have made some progress in a pre-trial investigation linked to the discovery of a large but unspecified amount of drugs in a shipping container in Espoo on 16 December, reports Helsingin Sanomat.

The District Court of Helsinki has detained five men, aged 19–30 years, in connection with what is believed to have been an attempt to recover the drugs.

A group of masked men invaded the industrial site in broad daylight and assaulted the driver of a lorry who was unloading the cargo onto a platform at the chemicals warehouse of Algol, a family-owned import and retail company headquartered in Espoo. They failed to recover the drugs and were taken into custody as they sought to board a cruise ship bound for Stockholm at Olympia Terminal in Helsinki later on 16 December.

They are suspected of aggravated attempted robbery and aggravated drug offence.

Lauri Hakkala, a detective chief inspector at Western Uusimaa Police Department, told Helsingin Sanomat on Monday that the five men arrived in the country, with two cars, on two ships from Stockholm – some to Turku and the others to Helsinki.

“It’s typical to try to distribute the entry to be able to cross borders without drawing attention,” he said to the newspaper.

The seized drugs are still being analysed in a forensic laboratory, but rapid tests indicate that the drugs are cocaine. Although the quality and quantity of the drugs has yet been specified, it is already clear that the drug seizure is the largest in the history of Finland, according to Helsingin Sanomat.

“We’ve ascertained the identity of some suspects based on residence permits. We’ll have to determine their nationalities through the countries of residence,” said Hakkala.

He also admitted that the investigators rushed to the conclusion that the incident could be related to Albanian organised crime. The Albanian person brought into custody during the pre-trial investigation, he added, is not suspected of any offences.

“Maybe it was premature to draw the conclusion that this has something to do with the Albans,” he stated to Helsingin Sanomat.

The pre-trial investigation remains in its early stages, with the police still seeking to identify and arrest the rest of the people involved in the drug shipment, said Hakkala. “The group of five came here to do an assignment, but we’ve yet to have a breakthrough on who gave the assignment and in which country,” he explained.