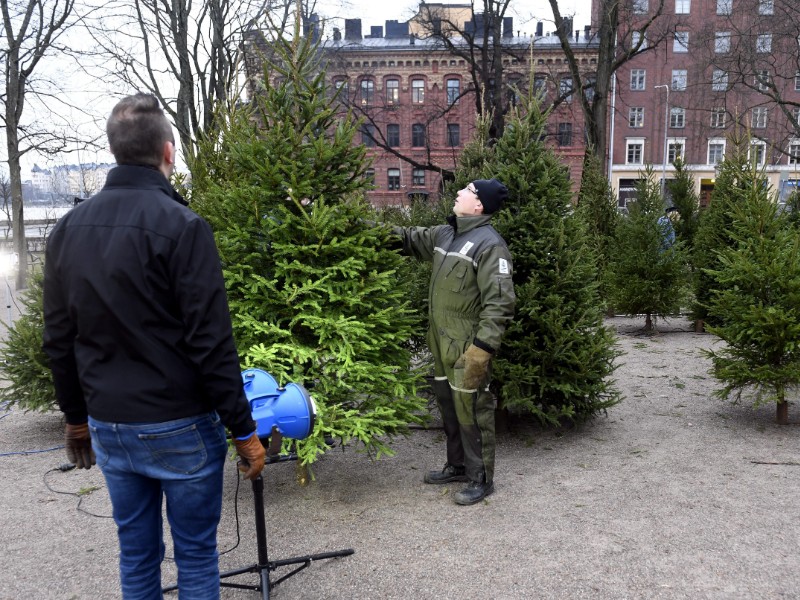 CHRISTMAS is a big thing in Finland. But what does it entail exactly – how many kilos of ham, how many litres of red wine, how many euros spent on gifts and how many spruces chopped down and decorated at homes across the country?

Those and many other holiday-related questions have now been answered by Statistics Finland.

Statistics Finland on Friday revealed that approximately 1.4 million spruces are hauled annually into homes across Finland for Christmas Eve. Roughly a million of them are grown domestically specifically for that purpose, 300,000 are chopped down from private forests and 150,000 imported from abroad – mainly from Sweden and Poland, according to Finnish Customs.

It is therefore no surprise that well over a third (39%) of the public identified spruce as the plant that contributes the most to the holiday spirit in a survey conducted by Plantagen, a major chain of garden centres in the Nordics. The second most popular choice was poinsettia, at 32 per cent.

The holidays are best enjoyed in good company at the dining table, found a survey by Posti and IRO Research. The majority (70%) of respondents viewed that the best part about the holidays is spending time with family and loved ones and eating holiday specialities, such as oven-baked ham and root-vegetable casseroles.

Finns gobble down more than six million kilos of ham every year at Christmas. Almost three-quarters (74%) of them intend to honour the tradition also this year, according to Lihatiedotus.

Roughly two per cent of the public opt for a meat-free alternative, such as wheat gluten.

Overall Finns spend an average of 161 euros on holiday foods, shows a survey by Lidl. A bit less could perhaps suffice, as the survey also found that a fifth of people buy or make too much food for Christmas.

Red wine has held on to its status as the most popular holiday beverage. Alko, the Finnish state-owned alcohol retail monopoly, has reported that roughly two million litres of red wine is sold over the two weeks leading up to Christmas, more than double the amount sold over an ordinary two-week period. Rose wine, meanwhile, is a relatively new but increasingly popular feature of the holiday feast, with its sales jumping by 29 per cent to 70,000 litres.

The retailer sold a total of 10 million litres of beverages in December 2018.

Finns were planning on spending an average of 330 euros on gifts and 200 euros on other holiday-related expenses prior to this Christmas, according to a survey by Nordea.

The Christmas budget was exceeded by a fifth of the people who responded to the survey. Almost a third (29%) of Finns are also concerned that their money may not suffice for holiday expenses, according to the European Consumer Payment Report by Intrumin.

Hintaopas, an online price comparison tool, has predicted that the most popular gifts this year will be ear- and headphones, game consoles and smartphones. With S Group reporting that hula hoop is one of the hits of this holiday season, many will have a good idea of what they are getting before unwrapping their gifts.

Finns also appreciate surprise gifts, which were on the wish list of 62 per cent of respondents to a survey by YouGov.

The spending spree has typically resulted in a 25 per cent up-tick in the revenues of the retail sector, which reported total revenues subjected to value-added tax of 4.8 billion euros in December 2018 – equivalent to almost 1,030 euros for every 15–85-year-old resident of Finland.

This month is important particularly for department stores and speciality retailers, with jewellery shops seeing an over 100 per cent increase in monthly sales in December.

Finns made a total of 2.2 million domestic trips that included at least overnight stay in December 2018. The majority of the nights spent away from home – 1.7 million – were spent at relatives, friends or self-owned holiday homes.

The most popular domestic destinations were spas and ski resorts.

The number of overnight trips abroad, in turn, stood at 620,000 last December. Almost a half (46%) of the trips were made to the Baltics and Nordics, 42 per cent to other parts of Europe and 12 per cent to countries outside Europe.