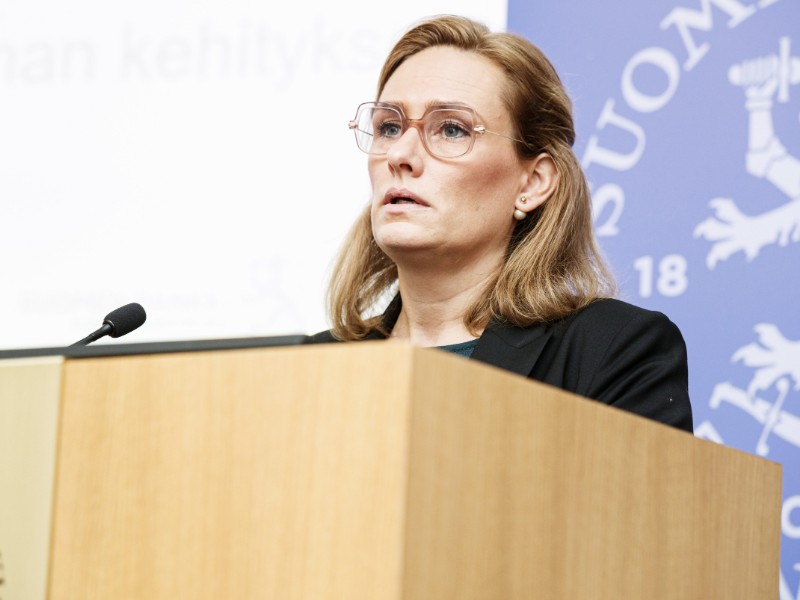 Meri Ostbaum, the director of forecasting at the Bank of Finland, presented the monetary authority’s economic forecast for 2020–2022 in Helsinki on Tuesday, 17 December 2019. (Roni Rekomaa – Lehtikuva)

THE BANK OF FINLAND expects the Finnish economy to grow by less than one per cent in 2020.

“There are fairly clear signs of a slowdown,” Meri Ostbaum, the director of forecasting at the Bank of Finland, pointed out at the release event of the monetary authority’s regular economic review, Euro & Talous.

The Bank of Finland on Tuesday announced it has downgraded its growth forecast for the national economy from 1.5 to 0.9 per cent, but expects the growth rate to rebound to 1.1 per cent in 2021 and 1.3 per cent in 2022.

Governor Olli Rehn pointed out that the Finnish economy has yet to complete its transition and must continue to adjust to two major structural re-alignments: population ageing and failure to recover fully from the shocks suffered in the aftermath of the latest financial crisis.

He acknowledged that governments and labour market organisations have introduced a number of key solutions to address the issues in recent years, such as the pension reform and competitiveness pact adopted in 2017. “More determined action should, however, be taken to strengthen the public finances and the prerequisites for employment,” he added.

Rehn also pointed out that public revenues and expenditures are set to remain imbalanced in the long term, highlighting that the so-called sustainability gap has widened since the previous forecast.

“For the long-term outlook for the public finances, the aim of raising the employment rate to 75 per cent over the next five years is well-justified. Beyond this, we should aim even higher, to reach a good Nordic level,” he said according to a press release from the Bank of Finland.

The primary means to improve the employment situation are increasing labour supply, promoting competitiveness and tackling the labour market mismatch.

The Bank of Finland also expressed its concern with the sluggish growth rate of labour productivity over the past decade, viewing that the growth can best be boosted with astute innovation and education policy.

“In Finland, the average educational attainment of young adults began to decline some 10–15 years ago. This is exceptional in international comparison and concerning form a Finnish perspective,” commented Rehn.

Minister of Finance Katri Kulmuni (Centre) stated in the Finnish Parliament on Tuesday that the expected slowdown is due to “completely normal” cyclical fluctuation. “There has been no dramatic change in the big picture and, in fact, the situation is slightly better in light of short-term expectations,” she said.

The International Monetary Fund (IMF), she pointed out, has noted that the government is on the correct fiscal policy path.

The Finnish government has appointed tripartite task forces to draft measures to improve the employment situation, expecting to receive their proposals at its informal evening meeting in January. Kulmuni promised that the government will bear its responsibility for the employment target and will not rule out any measures.

“The reforms, however, will be carried out in ways that promote trust and inclusion, and reduce uncertainty about employment and livelihood in the whole Finland,” she outlined.