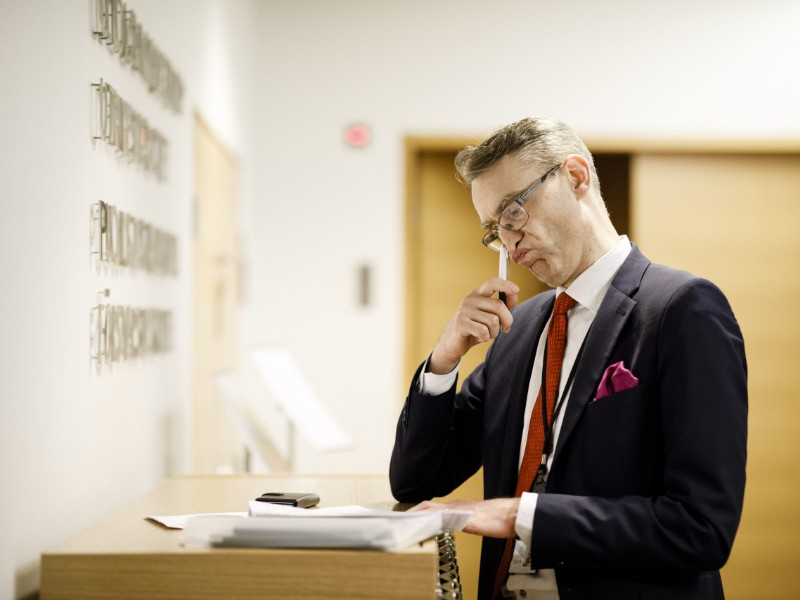 Chancellor of Justice Tuomas Pöysti prepared for a hearing at the Parliament’s Foreign Affairs Committee in Helsinki on Monday, 3 December 2019. (Seppo Samuli – Lehtikuva)

CHANCELLOR OF JUSTICE Tuomas Pöysti will examine the actions of Minister for Foreign Affairs Pekka Haavisto (Greens) and the Ministry for Foreign Affairs in regards to the situation of Finnish nationals at al-Hol, a detention camp for the women and children of the so-called Islamic State.

Pöysti on Monday stated to YLE that serious allegations about possibly illicit actions have been made in the public debate and formal complaints.

“There are grounds for looking into this,” he commented to the public broadcasting company.

Although at least one complaint has been filed with the Police of Finland, the issue falls within the purview of the Chancellor of Justice.

Pekka Puustinen, an under-secretary of state at the Ministry for Foreign Affairs, told Helsingin Sanomat on Monday that Haavisto has not acted in violation of the law and suggested the dispute stems from a “severe difference of opinion” between the minister and certain officials on how to assist Finns at al-Hol.

Haavisto has found himself under scrutiny following a report published by Ilta-Sanomat on Sunday, 2 December. The report claimed that the minister had attempted to pressure one of his subordinates into arranging consular returns for children at the camp – a claim that has been rejected by Haavisto.

The Parliament’s Foreign Affairs Committee later expressed its support for the minister, with all three votes against coming from members of the Finns Party.

The Finns Party has also announced its readiness to submit an interpellation unless the minister steps down. The National Coalition, in turn, has presented a question for a written answer about the minister’s actions and the government’s position in regards to Finnish nationals at al-Hol.

The Green League announced yesterday evening it is not making any changes to the distribution of its ministerial portfolios.