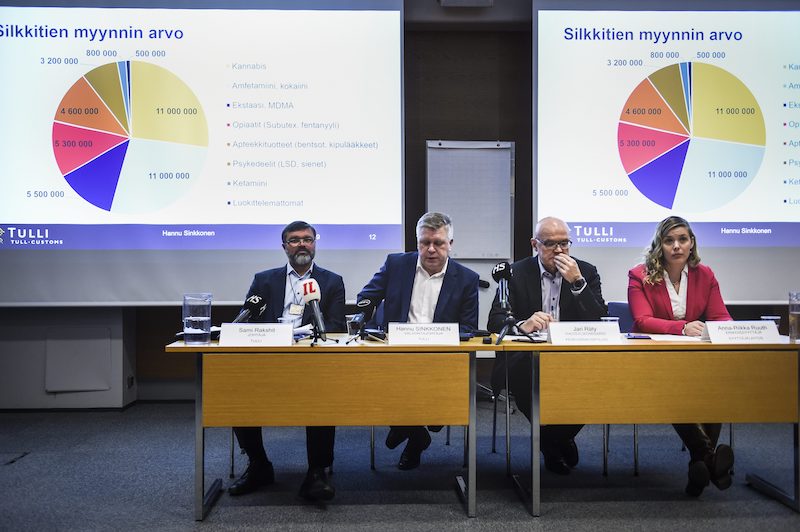 Director of Finnish Customs Sami Rakshit, Director of Enforcement Hannu Sinkkonen, Detective Superintendent, and tactical leader of the whole case at the National Bureau of Investigation Jari Räty and Senior Specialised Prosecutor at the National Prosecution Authority Anna-Riikka Ruuth in the joint press conference of Customs and Police in Helsinki on 4 Dec. 2019.

In spring 2019, Finnish Customs seized the Silkkitie web server in cooperation with the French authorities. The web server had been operational in an encrypted network since 2013. Based on the information retrieved from the server, Finnish Customs has, in cooperation with the National Bureau of Investigation and several police departments, started preliminary investigations related to suspected sellers and buyers.

Online stores, such as Silkkitie, have considerably increased the supply of narcotics in Finland, especially outside large cities and also to minors. What has increased the popularity of Silkkitie is that it is used anonymously and the products are delivered via legal operators. Based on the IT forensic investigation of the Silkkitie server, Finnish Customs has been able to establish the identities of thousands of Finnish sellers and buyers.

"In the encrypted network, the administrators of the services as well as the sellers have believed and have made the buyers believe that the online trade in narcotics and other illegal products is “safe” because of the anonymity, and therefore inaccessible to authorities and free from criminal liability. If not earlier, this myth has now been broken", says Hannu Sinkkonen, Director of Enforcement, who is the tactical leader of the case at Finnish Customs.

The closing down of Silkkitie has had a significant effect on the narcotics trade and other illegal trade in the encrypted network.

"The number of seizures of narcotics consignments arriving in Finland has decreased after March 2019", says Sinkkonen.

Silkkitie had a turnover of around 50 million euros

On the Silkkitie website, the trade in illegal substances and other products was carried out using pseudonyms, and the purchases were paid with the virtual currency bitcoin. The narcotics and other illegal substances were delivered from the sellers to the buyers mainly by post. The administrator of Silkkitie took on average a five-percent commission of the trade carried out on the website, but did not participate in the actual trading.

On the Silkkitie trade site, there were around 400 000 pseudonyms when the site was operational. There were approximately 500 000 concluded transactions, and 78 000 different products were for sale. The sales were primarily directed to Finland. Silkkitie had users all over Finland, with an age range from 15 to 83 years. The turnover of the whole trade site was around 50 million euros.

In 2014–2019, Finnish Customs has conducted preliminary investigations of around 30 sellers on the Silkkitie website. The biggest investigated sellers have been Douppikauppa and Ekstaasikauppa. In connection with the preliminary investigations of the sellers, Finnish Customs has seized bitcoins worth a total of approximately 20 million euros. In cases related to Silkkitie, the prison sentences given so far add up to a total of around 100 years.

The investigation in Finland has been a cooperation between Finnish Customs, the National Bureau of Investigation and police departments

During the preliminary investigation related to the Silkkitie website, Finnish Customs has cooperated extensively with the French authorities, with Eurojust (the European Union's Judicial Cooperation Unit) and Europol, and in Finland with the National Bureau of Investigation and police departments.

Finnish Customs, the National Bureau of Investigation and the police departments have started several preliminary investigations of the Finnish sellers and buyers, concerning the different categories of severity of the following types of offences, among others: narcotics offence, doping offence, smuggling, medicine offence, firearms offence and tax fraud.

The Police is investigating thousands of suspected offences

Police departments around Finland are investigating thousands of suspected offences related to the narcotics trade on the Silkkitie website.

"It is an enormous investigative effort throughout the country. At the moment, most police departments are going through the material received from Finnish Customs and sorting the cases under investigation according to their scope and type. At some departments, the investigations have moved on to questionings and other measures", says Jari Räty, Detective Superintendent, who is the tactical leader of the whole case at the National Bureau of Investigation.

The scope of the suspected offences varies significantly: some investigations concern individual transactions, whereas others concern more than one hundred thousand euros in proceeds. Some of the purchased narcotics consignments were so large that the police suspects that the buyers have sold narcotics onwards.

"It is also a sign of the change in the narcotics market. The rise in online trade has made the use of narcotics more common also in rural areas and small municipalities, when it is possible to order narcotics online and delivered to the door. Earlier, the narcotics trade was mainly concentrated in large cities," says Räty.

The information of the purchase transactions the Police has received from Finnish Customs is very detailed, and in the next few months, the Police will take various measures concerning the suspected offences. Persons involved in the trade on the Silkkitie website can also contact the police department in their area and give an account of the matter on their own initiative. This will make the investigation process easier and quicker also for the suspect.

"Having specially assigned prosecutors handle the criminal matters related to Silkkitie ensures more effectively that criminal liability is imposed equally and uniformly, regardless of where in Finland an offence has been committed," says Anna-Riikka Ruuth, Senior Specialised Prosecutor at the National Prosecution Authority.

Finnish Customs facilitates the trade in goods and ensures its correctness, offers customer-oriented services and protects society, the environment and the citizens. Customs efficiently collects customs duties and similar charges, fairway dues and other taxes and charges levied on import goods. Customs also compiles the official foreign trade statistics on the imports, exports and trade balance of Finland. As a government agency steered by the Ministry of Finance through performance management, Customs cooperates both with the private business sector and with domestic and foreign authorities. Customs has around 1 900 employees. Finnish Customs is a part of the customs system of the European Union.