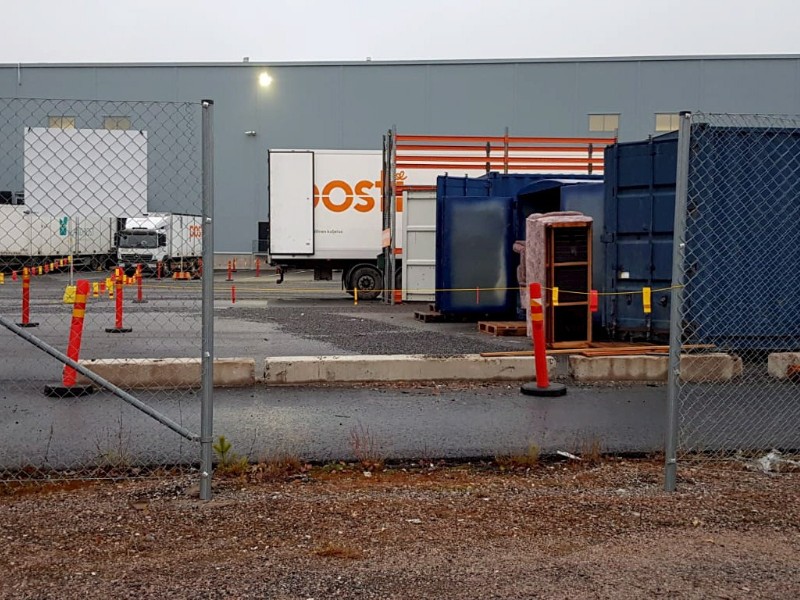 An opening in the fence surrounding the logistics centre of Posti in Lieto, South-west Finland, on Monday, 11 November 2019. (Handout – PAU)

POSTI has reiterated that the postal strike that began yesterday will cause delays of up to weeks in letter, magazine and advertisement deliveries, as well as mail re-direction requests submitted by mail.

Its service points, on the other hand, will remain open and early-morning newspapers will be delivered as usual during the several-week strike organised by the Finnish Post and Logistics Union (PAU).

“We are doing whatever we can to make sure the effects of the strike that began today are as small as possible. Some of our employees are working, meaning some deliveries can be made,” highlighted Jarmo Ainasoja, the head of exception management at the Finnish state-owned postal services provider.

PAU on Sunday announced the strike has been extended from a two-week to a four-week one, estimating that approximately 10,000 employees at the state-owned company will participate in the industrial action.

Service Sector Employers (Palta), in turn, reiterated that the strike is an indication of the trade union’s inability to recognise the impact of falling mail volume on the market situation of Posti.

Tempers between the parties to the labour dispute frayed on the first day of the strike, after it was revealed that an opening had been cut in the fence surrounding the logistics centre of Posti in Lieto, South-west Finland.

Heidi Nieminen, the chairperson at PAU, told Uusi Suomi that the opening allows hired labour to enter the workplace without having to encounter the pickets stationed at the main gate. She also accused the employer of wrongfully claiming that it would be illegal for hired labour to participate in the industrial action.

“Posti doesn’t want its employees to get an opportunity to explain why they’re on strike to hired labour,” she said. “Some workers have joined the strike after hearing the explanation. And Posti is obviously trying to do whatever it takes to prevent this from happening.”

“These are examples of the current employee policy of Posti.”

Ainasoja on Monday said the fence was cut open to create a faster route from the parking lot to the logistics centre.

“The idea is that you don’t have to make a detour to get to work,” he explained to Uusi Suomi. “The timing of course could’ve been better, but it’s something we had been considering already for some time.”