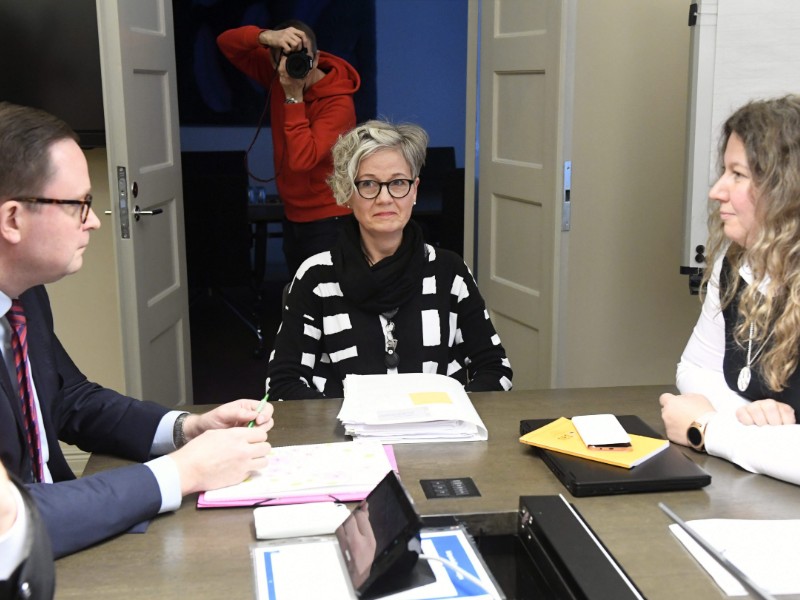 Tuomas Aarto of Service Sector Employers (left) and Heidi Nieminen of the Finnish Post and Logistics Union (right) sought to set aside their differences under the guidance of National Conciliator Vuokko Piekkala in Helsinki on Thursday, 7 November 2019. (Vesa Moilanen – Lehtikuva)

THE TRADE UNION for the Public and Welfare Sectors (JHL) has announced its participation in the two-week postal strike launched next Monday by the Finnish Post and Logistics Union (PAU).

JHL on Thursday declared that its members in mail delivery, handling and transport positions will join the approximately 9,000 postal workers going on strike between 11 and 24 November. Its members in other postal positions will additionally turn down duties covered by the strike and overtime work.

“They will continue to perform their own duties as usual,” it told.

JHL also revealed that it has begun preparations on other measures to support the strike staged by PAU.

Vuokko Piekkala, the National Conciliator of Finland, confirmed yesterday that the strike is set to start on Monday. Her pessimism about a last-minute resolution to the long-running dispute was shared by Heidi Nieminen, the chairperson at PAU.

“I see no other choice than to start the strikes on Monday,” she said.

PAU and Service Sector Employers (Palta) are not expected to re-convene until next Wednesday.