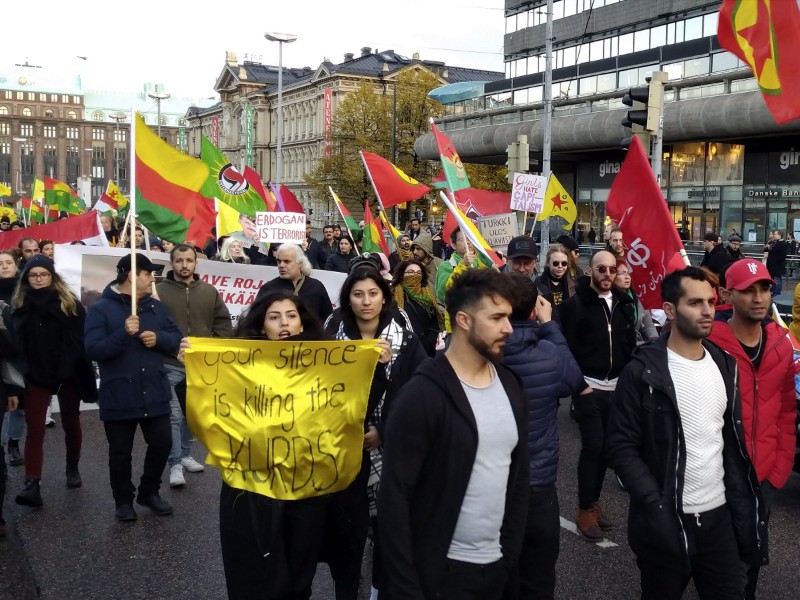 An estimated 300 people took part in a protest march organised in Helsinki on Saturday against the actions of Turkey in Syria. (Irene Stachon – Lehtikuva)

MARIA OHISALO (Greens), the Finnish Minister of the Interior, has asked the police to produce a report of its actions in connection with a demonstration held in Helsinki on Saturday.

The Helsinki Police Department on Saturday stated in a press release that its police officers had to resort to forcible measures in connection with a protest march held against the occupation of northern parts of Syria by Turkey.

The organisers of the demonstration, it said, asked police for a permission to spearhead the march in a car, but their request was turned down for safety reasons. Because the organisers failed to comply with the instructions, police officers prohibited the demonstrators from leaving Narinkkatori Square in Helsinki.

Police eventually had to break the window of the car to bring it to a halt and deploy mounted police officers to keep the demonstrators under control.

“A number of demonstrators were simultaneously preventing a police car from moving. Police had to discharge a stun gun at a person resisting police. The demonstration was allowed to start after these events and proceeded peacefully along the planned route in the city centre,” the press release reads.

An estimated 300 people took part in the protest march.

Ohisalo on Sunday reminded that public confidence in police is key for fostering a sense of security in Finland.

“The police is responsible for protecting the basic rights of both demonstrators and bystanders. Confidence in police must stay high so that we can foster a sense of security,” she underscored on Twitter.

The Helsinki Police Department has been asked to investigate if the events constitute an assembly violation, violent resistance to a public official or another offence.

Alan Salehzadeh, a researcher specialising in geopolitical conflicts in the Middle East and North Africa, said he was observing the demonstration as a bystander and described the actions of police officers as unfair and provocative.

“I’ve never been a member of a Kurdish party or movement, or organised any demonstrations in Finland. I observed the actions of police as a bystander. It was unfair – heavily armed [officers], in front of children and peaceful people. The situation immediately seemed provocative,” he responded to Ohisalo on Twitter.