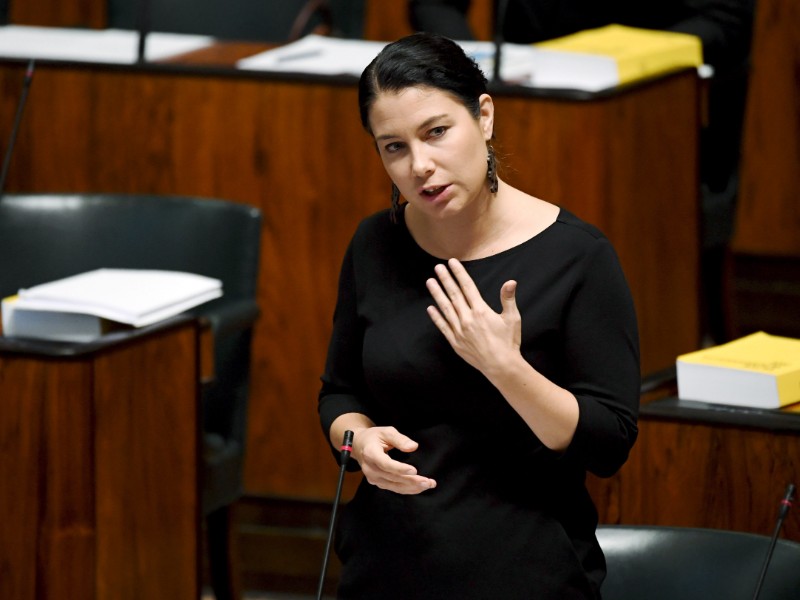 Emma Kari, the chairperson of the Green Parliamentary Group, says the recent debate is evidence of the ideological nature of meat-eating. (Antti Aimo-Koivisto – Lehtikuva)

MEMBERS of the Centre Party have continued to lambaste the decision to take beef off the menus of cafés and restaurants at the University of Helsinki.

Anne Kalmari (Centre), the chairperson of the Parliament’s Agriculture and Forestry Committee, wasted no time in reacting to the announcement by Unicafe on Tuesday, labelling the decision as inexplicable and unsustainable and expressing her support for domestic beef producers.

“It’s unsustainable that this ‘veggie mafia’ is trying to deprive other people of the right to eat what they want under the pretence of climate change,” she said in a press release on Tuesday.

The cafes and restaurants are operated by Ylva, a company owned by the Student Union of the University of Helsinki (HYY).

The debate has since clicked into a higher gear. Mikko Savola (Centre), a second-term Member of the Finnish Parliament from Vaasa, voiced his disapproval with the decision and the reasoning behind it.

“No one is saying a word about local food. People in Helsinki don’t know which end is up,” he stated on Twitter.

“Unicafe’s boycott on Finnish beef has been justified with the same emissions calculations that only apply to meat production in Latin America, according to a study by Oxford University. Alas, you’d think that the university has access to at least this much research data.”

His sentiments were echoed by Mikko Kärnä (Centre), a second-term Member of the Parliament from Lapland. Beef, he argued, is a by-product of milk in Finland.

“If we don’t eat it and let cattle die of old age, the computational emissions of milk would rise and we’d be talking about eco-wasting. Pigs and chicken, by the way, still eat soya. Cattle don’t. This decision makes no sense whatsoever,” he argued in an open letter addressed to everyone giving up domestically produced meat.

“The only correct climate decision would be to shift to domestic, locally produced food. It’s just costly and that’s why it’s not produced,” said Kärnä.

Emma Kari, the chairperson of the Green Parliamentary Group, interpreted the debate as evidence of the ideological nature of meat-eating. “It’d be good to get rid of this needless meat ideology. It’d be in the best interests of both the climate and the environment,” she said.

Unicafe has responded to the criticism by reminding that it has disclosed the source of its meats for several years and assuring that the meats used to replace beef – namely pork and poultry – will all be domestically produced and provided by Atria.

Jannica Aalto, the head of marketing and communications at Ylva, also revealed that the emissions of beef have been calculated based on figures provided by, for example, the Finnish Meat Trade Association.

Leena Pihlajamäki, the chief operating officer at Ylva, reminded that the pricing framework for student meals makes it impossible to use grass-fed beef, for example.

“Let’s bust a few myths concerning the beef-free debate. 1) We only use Finnish meat. 2) Taking beef off our menus actually creates no cost savings for us. 3) Even Finnish beef has a big carbon footprint compared to other protein sources,” she tweeted.