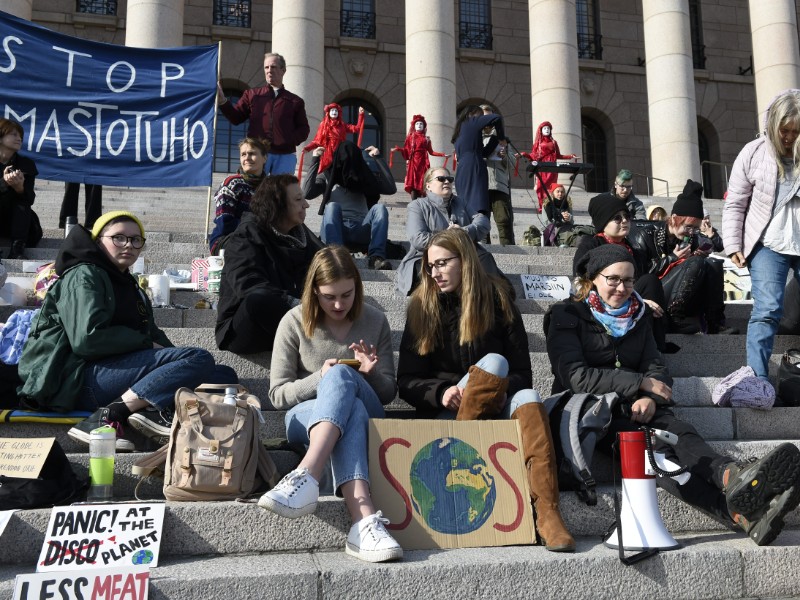 Climate change protesters on the steps of the Parliament House in Helsinki on Friday, 20 September 2019. (Emmi Korhonen – Lehtikuva)

YOUNG PEOPLE in Helsinki will be allowed to participate in the climate strike scheduled for Friday, 27 September, reports Helsingin Sanomat.

Osmo Kivekäs (Greens), a councillor for the City of Helsinki, revealed last week that the city will send instructions to its schools to allow pupils to participate in the strike, which is to be the culmination of the global climate change week in Finland.

The climate strike will be organised on the steps of the Parliament House between 10am and 2pm. Similar strikes will be organised simultaneously in a number of other cities, including Espoo, Oulu, Rovaniemi, Tampere and Turku.

The objective of the strike is to compel the government to achieve its objective of becoming the first carbon-free welfare state in the world and commit to updating the climate change act in a way that aligns the emission reduction and carbon sequestration targets with the goal of confining global warming to 1.5ºC.

In March, an estimated 3,000 young people skipped school to participate in climate strikes held across Finland, according to Helsingin Sanomat.