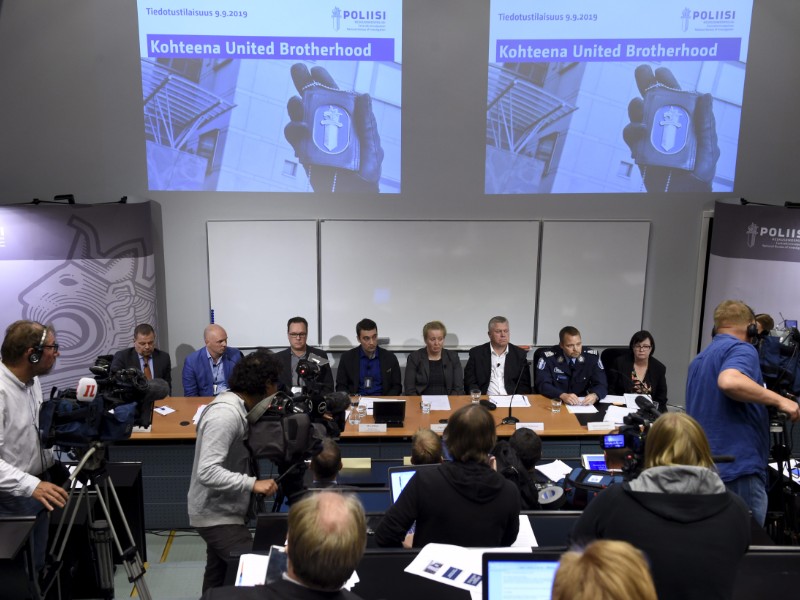 Senior officers at the National Bureau of Investigation shed light on a long-running effort to bring down United Brotherhood in Vantaa on Monday, 9 September 2019. (Emmi Korhonen – Lehtikuva)

THE DISTRICT COURT of Eastern Uusimaa has been asked to prohibit the activities of United Brotherhood and its affiliate, Bad Union.

Helsingin Sanomat on Tuesday reported that a claim calling for the ban and subsequent dissolution of the criminal organisations was filed with the court by district prosecutor Anna-Riikka Ruuth and the National Police Board on Friday, 6 September.

United Brotherhood would become the first organisation of its kind to receive a cease-and-desist order from a Finnish court, according to the daily newspaper.

The claim is part of a long-running effort to put an end to the activities of the organisation, which is considered by authorities to be the most dangerous criminal organisation in Finland. The National Bureau of Investigation (KRP) on Monday said members of the organisation and its affiliate have been suspected of over 1,300 offences in the 2010s.

The defendant named in the claim is a 47-year-old man from Porvoo, wrote Helsingin Sanomat. The man is believed to have served as the chief of United Brotherhood since 2016, when the organisation was created in a merger of three notorious gangs: M.O.R.E., Rogues Gallery and Natural Born Killers.

Ruuth and the National Police Board justify their demands by arguing that the group is militarily organised and engages in illegal activity – especially drug offences and extortion – to generate profits.

“United Brotherhood takes advantage of its violent reputation and its insignias that contain an external deterrent effect in all of its operations. United Brotherhood has partly also taken control of Finnish prisons, which is indisputably the right and responsibility of authorities,” the claim reads according to Helsingin Sanomat.