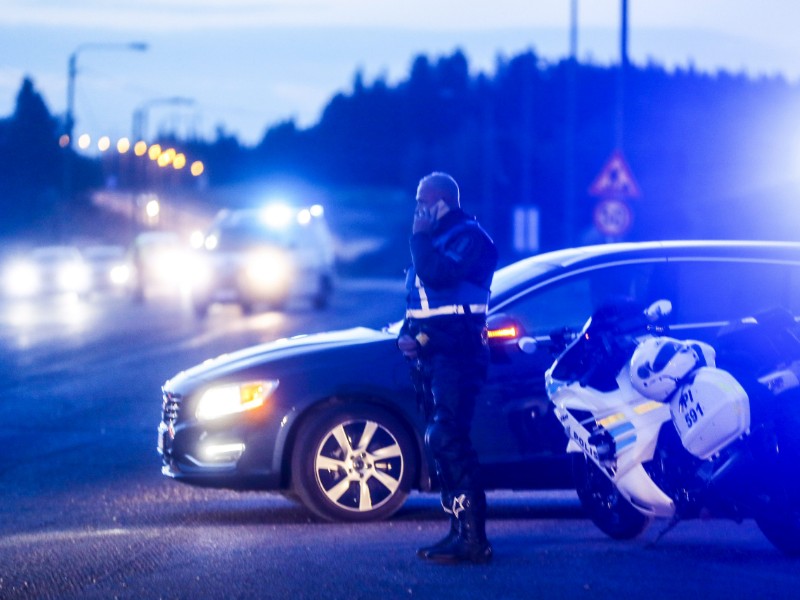 Police arrested two people in Pirkanmaa at 8.36pm on Sunday, after a roughly 30-minute high-speed chase on highway E12. The National Bureau of Investigation (KRP) has said the arrests are linked to a shooting that left two police officers wounded earlier yesterday in Porvoo. (Mika Kanerva – Lehtikuva)

TWO MEN have been arrested in connection with a shooting that caused serious but non-life threatening injuries to two police officers in Porvoo, Southern Finland, on Sunday.

The men were brought into custody after an approximately 20-hour search operation, which culminated in a 30-minute high-speed chase on highway E12, in Pirkanmaa at 8.36pm on Sunday, reported Helsingin Sanomat.

Up to 20 police cars took part in the chase, employing spike strips and pursuit intervention techniques to force the vehicle to a halt, according to an eyewitness interviewed by the newspaper.

“They started driving away when police tried to arrest them and fired shots at police from the fleeing vehicle,” National Police Commissioner Seppo Kolehmainen stated on YLE TV1 on Sunday.

The shooting took place as two police officers were responding to a routine call for services shortly after midnight in a small industrial park in Porvoo, a roughly 50,000-resident town situated 50 kilometres east of Helsinki. Helsingin Sanomat revealed that the responding officers were asked to ditch their weapons and shot immediately after arriving at the scene.

Whether the two men who shot at the officers are the same two who were brought into custody some 200 kilometres north-west of the scene of the shooting has yet been confirmed.

The National Bureau of Investigation (KRP) on Sunday revealed that the shooting is investigated as two attempted murders. Kimmo Huhta-aho, the detective chief inspector in charge of the pre-trial investigation at KRP, stated in a press conference that it appears that the gunmen seemed to be deliberately targeting authorities.

STT asked Huhta-aho whether it is possible that the incident is somehow linked to organised crime.

“The serious nature of the incident is certainly an indication of that possibly being the case,” he replied.