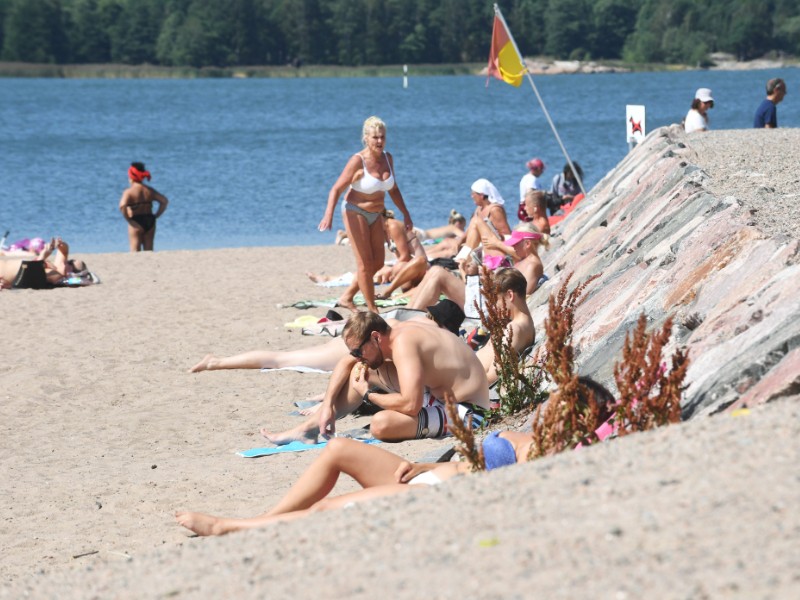 Sunbathers on the Hietaniemi beach in Helsinki on Thursday, 25 July 2019. (Laura Ukkonen – Lehtikuva)

TEMPERATURES in Finland will plummet as of the beginning of next week, according to the Finnish Meteorological Institute (FMI).

FMI on Thursday confirmed that the mercury is expected to breach the 30ºC-mark in several parts of the country over the weekend, but added that the weather is expected turn on its head at the beginning of next week.

“A cold air mass from the Arctic Sea will spread gradually across the country. Temperatures would in that scenario stay below 10ºC in the north and hover around 15ºC in the south,” it said.

Also Foreca, a private weather forecasting company based in Helsinki, is expecting temperatures to fall sharply across Finland. It stated yesterday that the current hot weather will be replaced by raw and gusty north-eastern winds that will increase cloud coverage and potential for showers in some parts of the country.

“Temperatures are expected to drop below 20ºC in many areas,” told Anna Latvala, a meteorologist at Foreca.

“It’s still uncertain whether the warm weather will return during the course of next week. The north-eastern current will subside and the coldest air mass will leave Finland, so there’s at least the possibility that we'll have regularly warm summer temperatures,” she added.